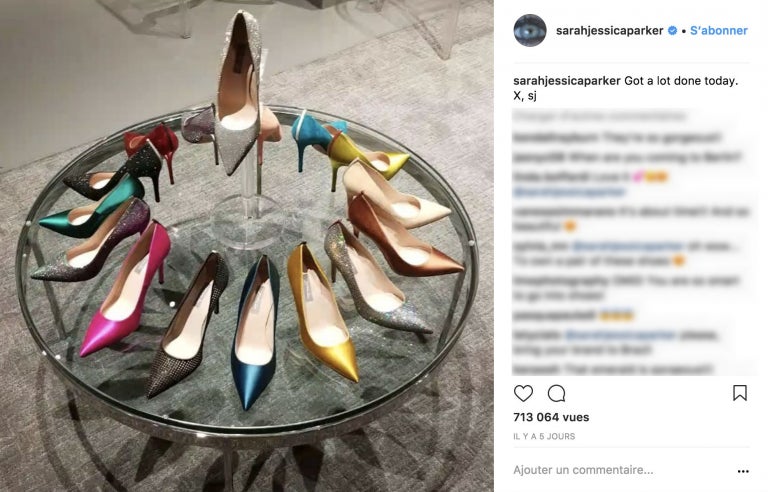 Pop-up stores are becoming a serious fashion trend this holiday season, and now Sarah Jessica Parker is getting in on the action.

The actress, fashion icon and budding designer was kept busy over the Thanksgiving weekend, thanks to the opening of her debut ‘SJP by Sarah Jessica Parker’ temporary boutique in New York. The store, which is located on 6 West 52nd Street, launched on Black Friday for a 10-day run through December 3, with Parker taking to Instagram to show a video clip of the crowd queueing down the block on the opening morning.

Instagram photos and videos posted by the star in the run up to the pop-up’s launch reveal a fun, shoe-focused retail space that Carrie Bradshaw would certainly approve of. Shelves of ‘SJP by Sarah Jessica Parker’ party shoes, from glittery silver ankle boots to red-ribboned stilettoes, line the walls, which are themselves covered in shoe-patterned wallpaper. A range of the star’s accessories, including bags and purses, are also available in store.

Parker first launched her SJP fashion label back in 2014, focusing on colorful, fashionable shoes with a signature grosgrain ribbon detail. The star has since added accessories and a series of ‘LBD’ little black dresses to the lineup.

As always, the “Sex and the City” star is bang on trend with her latest project, as pop-ups are proving to be the latest pre-holiday retail craze. Fellow Hollywood star Drew Barrymore also opened up her own pop-up store on New York’s Crosby Street earlier this month — a first for her ‘Dear Drew’ lifestyle label, while fashion brands such as Calvin Klein, Nasty Gal, and Bershka have all invested in temporary bricks-and-mortar set ups this season. AB