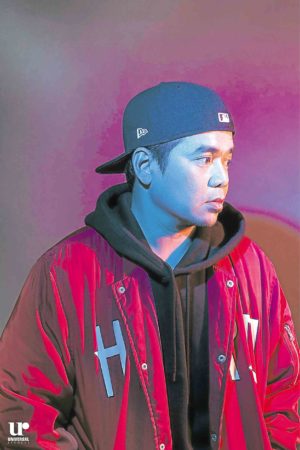 One thing rapper Gloc-9 has learned in his 20 years in the music industry? Career longevity isn’t determined by talent alone. Sincerity, he stressed, is just as important in maintaining connection with the audience.

“It’s one thing to have a great song or tremendous skill. But you have to be true to yourself and let people see that, too. The people will know whether or not your intentions are pure. And if you’re just a poser, people will discover that sooner or later,” Gloc-9, whose real name is Aristotle Pollisco, said at a recent press conference for his new EP, “Rotonda.”

Then, there’s his strong unflappable work ethic and focus on his own craft.

“People see me performing onstage—they don’t really get to see the extensive creative process that goes on behind the scenes. I wake up and go to the studio early. When I record something that’s not to my liking, I rerecord it after two seconds. I’m hard on myself,” related the hip-hop artist, who’s not one to compare himself to other rappers.

“It’s just not my thing. I don’t look at my colleagues as competition,” said Gloc-9, who remains bemused but thankful nonetheless, that he lasted in the business for as long as he has. “I can’t believe it because I’m not exactly a balladeer or someone who acts.”

He has also been hailed as the successor to the late Francis Magalona—his ultimate idol—and the torchbearer of local hip-hop music. He doesn’t think much of it. “I’m a dreamer and will stay one. That’s how I see myself—always,” he said. “I try my best to be approachable and accommodating to fans.”

Gloc-9, who has become renowned for infusing socio-political commentary into his music, touched on the ongoing war on drugs in “Norem,” one of the five tracks in his new “EP.” But the song doesn’t take sides; it doesn’t cast blame; it only hopes to enlighten.

“I worked with rappers Abaddon and Shanti Dope. We wanted to present the point of view of a drug pusher and a drug addict, which was tackled in their respective verses,” Gloc-9 explained, adding that the composition wasn’t meant to allude to anyone in particular.

“The song is also a nod to Francis M’s ‘Mga Praning,’” he added.

In the title track “Rotonda,” meanwhile, he delves into the concept of reincarnation. It tells of a man having recurrent dreams about someone’s past life and unfulfilled missions.

“The idea came to me after noticing that, in my 20 years in the business, a lot of things go in cycle—you encounter the same people and continue having similar experiences,” Gloc-9 said. “It also has to do with me realizing the importance of the time we spend in this world. Let’s not waste any of it.”