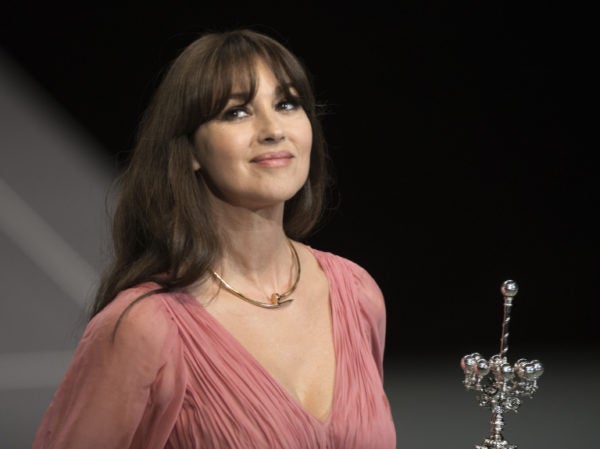 Having made her James Bond debut in the most recent film “Spectre”, Italian actress Monica Bellucci is being linked with the next, currently untitled, franchise entry.

Will Monica Bellucci be appearing in the 25th James Bond film?

It’s a rumor she refuses to confirm or deny, as her agent told Variety. And in a conversation with The Hollywood Reporter, she responded to a question about returning to the Bond universe with the words “I can’t say anything about that.”

But she does look back on her time making “Spectre” with affection.

As for her role as Lucia Sciarra, widow of an assassin who had fallen afoul of Bond, she noted that “Cinema is finally representing society.”

Both the quotations from her agent and from Bellucci herself came on the occasion of the Fondazione Cinema per Roma’s gathering to present the actress with a lifetime achievement award.

Having appeared in Francis Ford Coppola’s “Bram Stoker’s Dracula” in 1992 and then Gaspar Noe’s controversial 2002 film “Irréversible”, she gained widespread mainstream recognition for her role in the two sequels to “The Matrix”, 2003’s “The Matrix Reloaded” and “The Matrix Revolutions”.

Following “The Passion of the Christ”, she performed in English, French and Italian-language features, including Terry Gilliam’s “The Brothers Grimm”, critically acclaimed sex trafficking drama “The Whistleblower,” Jerry Bruckheimer fantasy “The Sorcerer’s Apprentice” and Cannes Grand Prix winner “The Wonders”.

Daniel Craig has already announced his return to Bond for a fifth time, having led “Casino Royale”, “Quantum of Solace”, “Skyfall” and “Spectre” with the unnamed 25th Bond movie being written by the duo behind those four previous releases.

A director is yet to be named, though French-born, London-raised Yann Demange of Northern Irish thriller “’71”, 2018 crime drama “White Boy Rick” and TV series “Top Boy” has been associated with the project, along with David Mackenzie of “Hell or High Water” and Denis Villeneuve, Canadian director of “Arrival” and “Blade Runner 2049”. JB

Read Next
Report: 5 women accuse Louis C.K. of sexual misconduct
EDITORS' PICK
High inflation: Your P1 is now worth only 87 centavos
UK’s Boris Johnson will resign, BBC reports
High-risk pregnancy: Reducing your risk is in your hands
Geek out at TOYCON 2022 powered by Smart Signature
House energy committee chair Arroyo bats for cheap electricity
Unemployment rate up to 6% in May
MOST READ
Suspect in grisly killing of missing woman in Bulacan arrested
Kim Atienza’s daughter flaunts bikini body in response to critics of her ‘revealing photos’
Japanese artist who created ‘Yu-Gi-Oh!’ found dead in the sea
UK PM quits as Conservative leader
Don't miss out on the latest news and information.