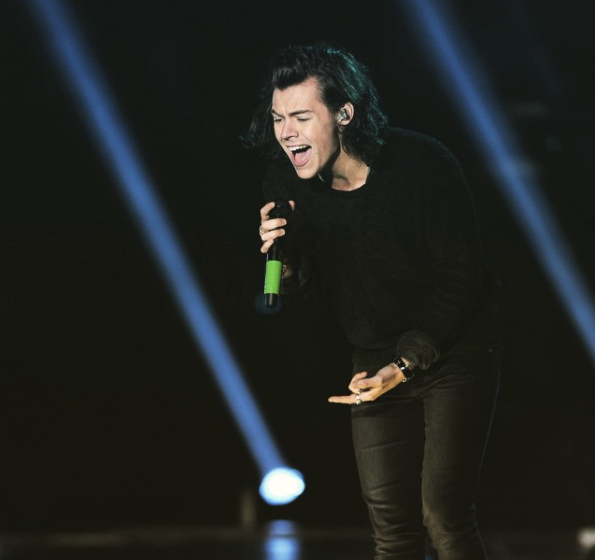 Harry Styles was performing in a charity concert when a fan allegedly groped him.

The former One Direction singer was at the CBS Radio’s We Can Survive 2017, which raises awareness for breast cancer.

He knelt on the stage when a swarm of fans reached out to him, and one appeared to grab at his crotch.

Styles is seen batting away the hand and continuing with his performance in a red suit.

The incident, caught on video by Jaqueline Lisinski, appears toward the end of the clip.

This is the original video of @Harry_Styles being grabbed by a fan (not me). I had originally posted it on Tumblr and it has since spread. pic.twitter.com/RVA3qxUxAo

Fans have condemned the act with the hashtag #RespectHarry and tagged the act as sexual assault.

It’s sad that we still have to do these trends cause people still can’t respect Harry. Call this what it is. Sexual assault #RespectHarry

Harry is NOT a womaniser or a sexual object! Please respect him ❤️he has a kind soul and doesn’t deserve hate or any abuse #RespectHarry

They also issued reminders on Twitter that the “Two Ghosts” singer is not a sexual object.

Uproar against sexual harassment and sexual assault has persisted since actresses have come forward with accusations that they had been sexually abused by Hollywood producer Harvey Weinstein.

Harry is not a sexual object, know your limits. Harry has been nothing but kind and respectful to all his fans, do the same #RespectHarry pic.twitter.com/f9H6QQcESt

One video even showed the correct way to touch Harry, should he be in your vicinity:

Styles has acknowledged that the fan love is mutual: In an April 2017 Rolling Stone interview, he came to the defense of teen girls, who constitute most of his fanbase.

“Teenage-girl fans—they don’t lie. If they like you, they’re there. They don’t act ‘too cool.’ They like you, and they tell you. Which is sick.” /ra

WATCH: No CGI as Harry Styles flies in music video ‘Sign of the Times’