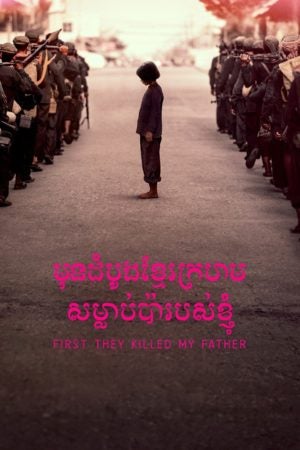 The Academy Awards, better known as the Oscars, is an annual awards show celebrating achievements in cinema across a number of categories from the past year.

“First They Killed My Father” is among the 92 films on the Academy’s initial long list, which will be shot down to a handful before the final nominees are decided in January 2018.

And there is a good chance that Angelina Jolie’s directorial debut film will bag the award. Jolie, an accomplished actress, was given an honorary citizenship of Cambodia in 2005, a country where she has done extensive charity work and from where she also adopted a child.

Jolie’s film is about the brutal Khmer Rouge regime – a theme which hasn’t been captured cinematically in such detail before – even though there have been precedents such as Roland Joffé’s Oscar-winning 1984 epic “The Killing Fields”.

“First They Killed My Father” is an adaptation of Loung Ung’s harrowing story of her family’s experience under the Khmer Rouge. Jolie, who co-wrote the film with Ung, does not try to over-explain every political detail of the civil war.

Shot entirely in the Kingdom and in Khmer, employing hundreds of locals, the story unfold’s through a child’s-eye. Ung is one of the seven children living in relative comfort in Phnom Penh when the Khmer Rouge rebels sweep into the capital.

If the movie picks the coveted award, as manny predict it will, it would not go to Jolie but to the country as a whole, under Academy rules.

“Dearest Sister” is directed by Mattie Do, regarded as one of Asia’s hottest new filmmaking talents. The story follows an impoverished young woman who moves to the city to take care of a wealthy older cousin. The older woman is losing her sight, but increasingly able to communicate with ghosts who provide them with a helpful set of numbers.

The film, a co-production between Lao Art Media, France’s Screen Division and Estonia’s Oree Films, has been received well being showcased at 24 film festivals across the globe.

Do, the country’s first female film director, previously made “Chanthaly,” another horror title.

“The greatest challenge of making a film in Laos is having to work with no resources, hardly any budget, and almost no professional infrastructure for films,” Do, was reported as saying.

Laos has only three working cinemas in the country, which is an obstacle for Lao filmmakers in gaining viewership.

The Association of Indonesia Movie Production has selected “Turah” to represent Indonesia in the 2018 Academy Awards.

Turah was selected from amongst 130 local films. Its strength lies in its honesty and simplicity both in its theme and development.

Directed by Wicaksono Wisnu Legowo, the 83-minute drama seeks to investigate the issue of poverty in Central Java.

Turah has also picked up two awards and received a special mention at the 27th Singapore International Film Festival.

Chinese film phenomenon “Wolf Warrior 2” will be screened in the Best Foreign Language Film category at the 90th Academy Awards.

As a commercial blockbuster, “Wolf Warrior 2” achieved huge success both at the box office and in public praise. More importantly, it redefined China’s entry for Oscar awards.

“Wolf Warrior 2” has received praise for its patriotic plot, action sequences and the cast’s performances but was criticised for excessive attention to visual effects and a plot short of “themes”.

Only four Chinese films have been officially nominated for the Best Foreign Language Film, despite submissions each year since 1979. The four are “Ju Dou,” “Raise the Red Lantern” and “Hero”, directed by Zhang Yimou, and “Farewell My Concubine”, by Chen Kaige – referred to as “literary films”.

However, China has not had much luck at this platform even though it makes hundreds of films each year.

“By the Time It Gets Dark” is Thailand’s selection for the Academy Awards.  Writer-director Anocha Suwichakornpong has described the critically acclaimed art house film as an “attempt to deal with the impossibility of making a historical film in a place where there is no history.”

This is Anocha’s second feature as director, writer and producer.

The film takes a historical massacre perpetrated by the Thai government as its starting point, before launching into a meditation on memory and the nature of filmmaking itself.

The film premiered at the Locarno Film Festival in 2016, and later won the best picture, best director and best editing honors at the Thailand National Film Association Awards, the Southeast Asian nation’s local version of the Oscars.

“By the Time It Gets Dark” has earned mostly positive reviews from international critics, with THR’s reviewer calling it a “demanding but ultimately rewarding piece.”

Based on a 1995 short story by the director, the film is set in a fishing village where a young boy falls severely ill. His father takes him on a whirlwind journey to see all the sights he has wanted to.

Tran Anh Hung’s “The Scent of Green Papaya” (1993) is the only Vietnamese film to have secured a nomination in the foreign-language category.

It is the latest feather in the cap for the set-in-Thailand road movie about a down-and-out architect and his elephant friend.

Writer-director Tan, 35, said in a statement: “Love it or doubt it, every film-maker in the world pays attention to the Oscars – to have a shot at representing Singapore with my debut feature feels to me a powerful and humbling experience. With Bong the elephant as our lucky charm, I can’t wait to see how far he would take us through the Oscar race.”

No Singapore film has made it to the shortlist of the Oscars – yet.

Taiwan’s ‘Small Talk’ is nominated in the foreign language category – this film by Hui-Chen Huang is an intimate portrait of her mother that won the best documentary prize at this year’s Berlin Film Festival.

A Teddy Award winner for best documentary at the Berlin International Film Festival earlier this year, “Small Talk” is a personal exploration of Huang’s relationship with her lesbian mother A-nu. The film delves into A-nu’s past as a Taoist priestess, as well as detail her romantic relationships, friendships and her role as a mother that was often absent.

“Birdshot” is the Philippines’ entry to the prestigious Academy Awards.

“Birdshot” features newcomer Mary Joy Apostol as Maya, a motherless farm girl who mistakenly kills a protected endangered Philippine Eagle. It is described as a coming-of-age thriller, which features a manhunt for the poacher of the national bird.

Mikhail Red, 25, is the director and writer of the film.

The film previously won Best Asian Future Film Award at the Tokyo International Film Festival. Red’s Cinemalaya entry “Rekorder” also made it to the category of the same festival.

“Her Love Boils Bathwater” written and directed by Ryota Nakano has been nominated by Japan for the Oscars.

The film tells the story of a mother who decides to resolve all her family’s problems after she is diagnosed with terminal cancer.

Japan first won the foreign-language Oscar in 1951 with Akira Kurosawa’s Rashomon and last won in 2008 with Yojiro Takita’s Departures. Japan has won four times and has been nominated 62 times, putting it joint second with Italy in terms of total nominations, behind France with 63.

The film is inspired by true events of the 1980 Gwangju Uprising. A German reporter receives the help of a local cab driver, to cover a massive, state-sanctioned massacre against civilians during South Korea’s democratisation movement.

While Korean films have gained prominence and international recognition in the past few decades, South Korea has yet to receive a foreign-language Oscar nomination.

“The Children of Genghis” was officially submitted for the 90th Academy Awards in the Best Foreign Language Film category, making its first-ever bids for the prestigious honor.

Directed by D.Zolbayar, “Children of Genghis” was filmed in Arkhangai province in 2016.

The film focuses on Mongolia’s horse racing tradition. The town’s best horse race trainer Bold, has many people gathered at his house and begins to brag about his horses and skills and how no one in town is better than him.

Haiti, Honduras, Lao People’s Democratic Republic, Mozambique, Senegal and Syria – making their first-ever bids for the prestigious honor. By March 4, we will know who walked off the red carpet with the honors.