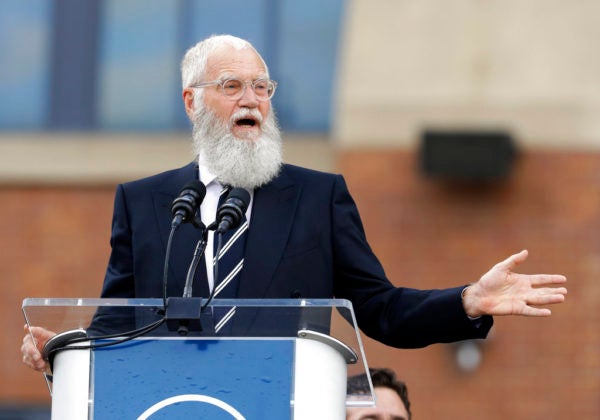 In this photo taken last Oct. 7, 2017, David Letterman speaks during the unveiling of a Peyton Manning statue outside of Lucas Oil Stadium, in Indianapolis. Letterman is being honored with the Mark Twain Prize for American Humor. He received the lifetime achievement award on Sunday, Oct. 22, 2017, at Washington’s Kennedy Center. (AP File Photo)

WASHINGTON – David Letterman was celebrated at the Kennedy Center on Sunday night for his record run on late-night TV, innovative comedy routines, and for helping the nation start to heal by reassuring that it was okay to laugh again after the terrorist attacks in September 11, 2001.

Among those in attendance were previous Mark Twain recipients Steve Martin and Bill Murray, and late-night host Jimmy Kimmel, who recalled a monologue that Letterman gave on his show shortly after 9/11.

“You let us know it was OK to move on and OK to laugh again,” Kimmel said. “Dave, you led the way for all of us.”

Kimmel jokingly blamed the election of President Donald Trump on Letterman’s retirement in 2015.

“It’s like you went out for cigarettes one day and left us in the hands of our abusive, orange stepfather,” Kimmel said.

“By the end of my third appearance, Dave was no longer totally indifferent to me,” she said.

Mulaney credited Letterman’s appeal with his determination to mine humor from ordinary people, and occasionally their pets.

The 70-year-old Letterman spent 33 years on late-night TV, hosting long-running shows on NBC, and then on CBS. His final broadcast on May 20, 2015, was episode No. 6028 that Letterman hosted. It shattered the record of his mentor, Carson.

On Sunday, comedians Steve Martin and Martin Short honored him by needling him about his bushy, white beard.

“Dave has always had excellent instincts. What better time that now to choose to look like a Confederate war general,” Steve Martin said.

Former First Lady Michelle Obama sent in a video tribute, and Pearl Jam lead singer Eddie Vedder thanked Letterman for being a long-time “friend to music” and performed the song “Keep me in your heart” by the late Warren Zevon, a Letterman favorite.

Letterman’s run on NBC in particular was hugely influential, introducing a sardonic, irony-drenched comedic style that influenced a generation.

Letterman introduced the country to fringe musical acts that might never have received an opportunity on “The Tonight Show.”

His humor was undeniably intelligent, but also at times surrealistic and silly. He pioneered segments called Stupid Pet Tricks and Stupid Human Tricks. He tossed watermelons and other objects off a five-story building; at one point, he wore a suit made of Velcro and jumped onto a Velcro-covered wall, sticking in place. He turned bizarre characters like Larry “Bud” Melman and Biff Henderson into cult celebrities.

Letterman started his career as a radio talk show host and TV weatherman in Indiana. In the mid-1970s he moved to Los Angeles, performing stand-up comedy, and writing jokes for (at the time more famous) stand-up comic Walker of “Good Times” fame. Eventually he caught the eye of “The Tonight Show” and Carson, performing several times on the show and becoming a regular guest host starting in 1978.

On Sunday, Murray stole the show with a surreal performance dressed as an Elizabethan-era monarch.

Murray said the perks of the Twain award elevate you above normal humans.

“You’re not exactly a god but you’re way up there,” he said. “You will be able to walk up to any man or woman on the street, take a lit cigar out of their mouth and finish it. You’ll be able to board any riverboat in this country.”

Murray then announced he was hungry and had a burger brought to him on stage. He then ordered platters of burgers delivered to Letterman’s balcony and cajoled Letterman’s son Harry to toss a pickle to the masses below.

Letterman ended the evening with a brief speech and a bit of dark humor, saying, “I kind of wish this award could be presented posthumously.”

He thanked the “hundreds and hundreds, perhaps thousands” of people who helped him along the way. He closed with a politically tinged quote from Mark Twain himself on the subject of patriotism: “Patriotism is supporting your country all the time and supporting your government when it deserves it.”             /kga