For the past six years, Emilia Clarke has successfully portrayed Daenerys Targaryen as both a kind and fearless leader who will do anything to stake her claim to the Iron Throne. 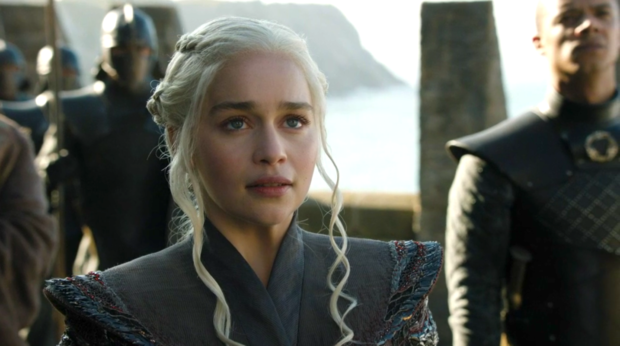 But the dragon queen truly wins behind the camera—particularly, her phone camera.

1. She always celebrates her castmates.

Prior to shooting together, Clarke was already good friends with Kit Harington, even if their characters were still miles away and barely knew of each other’s existence.

It didn’t stop her from calling the Jon Snow actor “Kitten” and cheered him on for his intense performance:

And exhale. It’s episodes like tonight that make me SO GODDAMN PROUD to be a part of BEST SHOW ON TELEVISION! Fact. 👏🙌👏 Harington, Turner, Cunningham, Houton, Hivju, Rheon, Sapochnik, Weiss, Benioff, take your bow. #workingwithvisionariesmakesmeonehaopychappy #kittensurehadusworriedforasecond…. 😱

During Emmys season, she was pumped about girl power. She featured two wonderful photos of Lena Headey who plays Cersei, and Maisie Williams who plays Arya.

And there she is in costume, looking less than regal by a port-a-potty:

NOMMY EMINATIONS! Oh no wait…. I mean EMMY NOMINATIONS!!! Now THIS is what I call the definition of GIRL.POWER! So honoured to be with my QWEENS! 🙌👸🏽 (And yes that’s me in costume standing by a teeny tiny porta potty in a field somewhere in Spain questioning if it could withstand allll.dis.dragon mamma) #ifiwasabettinggalidsayusladiesstandagoodchancewiththe3outta5…;) #gameofthroneswesalutethankpraiseyou ❤️

THIS ONE?!? Let’s all shut our eyes and take a minute. 🙏🏻 The most badass gal @geechrist in our show AND on the dance floor. @emmys2016 thank you for letting us reunite in a disco dazzle. 😘❤️😎😉 @gameofthrones YEAH BABAY!!! #lookslikeimabouttowetmyselflaughingandyouwouldtooifyouhadthadthatseat @jimmykimmellive you know how to BRING IT OUT 👊

Although we now know about HBO’s disaster with hacks and leaks, the cast and crew had to do their best to keep spoilers under wraps. But not Clarke: here she is with some important new characters:

She revealed some true squad goals with “Kitten” and her righthand woman Nathalie Emmanuel (Missandei on the show) who she funked out with at a concert.

She also threw in some witty hashtags with show references:

When she’s not trying to conquer seven kingdoms, she watches football matches with her political advisers, Tyrion (Peter Dinklage) and Varys (Conleth Hill):

Seville vs Barcelona?! WHAT A MATCH! Espana what a welcome you’ve given us all…. get a load of these grins and get a load of that match. 🙌 #unclekenwouldvebeenproudofmyhecklingforsure💪🏻 #arsenalfcyoureupnext…🙏🏻 #wearefilmingiswearnotjusthavingagiggle 💃

She also may have been slightly excited to wrap up shooting for the grueling penultimate season, and showed us some strong lip-synch game:

That feeling when at last you’re a day away from wrapping season 7. I BELIEVE THIS ONES GONNA BE A MIND BLOWER…🔥🍯 #itakemyjobseriouslyiSWEAR…

4. She’s still the queen at the end of the day.

For all the fun she has, she doesn’t forget her true allegiance, which is to the people outside Westeros whom she emancipated and have stood by her side.

Here she is ready to win season seven with Emmanuel and Raleigh Ritchie (Grey Worm):

Just before the seventh season premiered, she reminded fans what was hers:

And she wasn’t taking no for an answer:

Wait….. did I NOT tell you guys?! Um yeah. Now if he’d only bend the bloody knee there’ll be no problems….. 🔥💃❄️ #modragonsmoproblems #igot99problemsandjonsnowisone #whichroundsmeupto100problems #youknownothingjonsnow

She’ll do anything—she’s not beyond humiliating enemies. Jon Snow may not bend the knee, but she got him to pretend to be a dragon:

I mean, JEEEZE, one pet of a dragon and he thinks he’s one of them. ‍♀️ #youknownothingjonsnow #butyoudoknowhowtonotgetblownoffacliffingaleforsewindssotheresalwaysthat #everypunaboutwindicanthinkofinserthere 💨

With or without her dragons, Clarke has truly conquered social media. JB

Read Next
Princes William, Harry may be in next ‘Star Wars’ movie
EDITORS' PICK
Lacson wants DOF to suspend TRAIN law as oil prices rise
Leaked: A 60x Zoom and all-new Helio G96 mean a complete overhaul for TECNO Mobile’s new CAMON 18 series
Delivering delight against all odds
153 protests filed vs China actions in PH waters in 2021 — DFA
Next level mobile photography within reach with vivo X70 co-engineered with ZEISS
Duterte blasts rights groups for overlooking the ‘other side’ of drug war
MOST READ
Robredo to supporters: Be calm, gentle and do good deeds
Matibag calls Senate budget hearing ‘political,’ gets kicked out
Duterte inaugurates P684-M bypass road project in Quezon
Duterte: No drug dealers among the rich in PH
Follow @NGunoINQ on Twitter
Don't miss out on the latest news and information.