T.O.P of Big Bang gets suspended sentence for drug use | Inquirer Entertainment

T.O.P of Big Bang gets suspended sentence for drug use 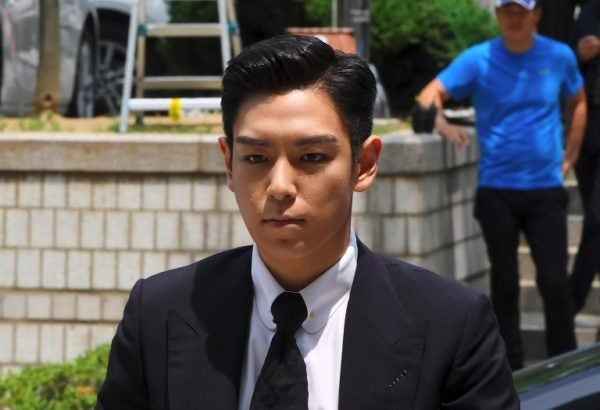 The 29-year-old rapper of K-pop boy band Big Bang had admitted in court to smoking marijuana on four occasions in his home in Seoul last October.

“As Choi has admitted to the charges, he is found guilty,” Yonhap news agency cited a Seoul judge as saying, referring to the singer by his real name, Choi Seung-Hyun.

The judge added that crimes related to drugs require stiff punishment as they can have a “negative effect” on overall society, but said the singer’s deep regret over his actions had been taken into account.

Arriving at the court, Choi told reporters that he “sincerely regretted causing trouble” and apologized to his fans.

Both recreational and medical use of marijuana is illegal in South Korea, and smoking the banned substance is a crime punishable for up to five years in prison or a 50 million won (US$44,500) fine.

A day after being indicted on the charges of smoking marijuana last month, Choi was hospitalized following an apparent tranquilizer drugs overdose.

Choi, who had been serving mandatory military service as a policeman since February, now faces a police disciplinary review on whether he can resume his duties or be dishonorably discharged.

More than 60 years after the end of the Korean War, every South Korean man between the age of 18 and 35 is required to perform two years of military service.

Big Bang is one of Korea’s most popular boy bands, having sold more than 140 million records worldwide since their debut in 2006. Choi has also pursued a successful career in acting, winning several awards.