Mark Hamill and Carrie Fisher honored as ‘Legends’ by Disney 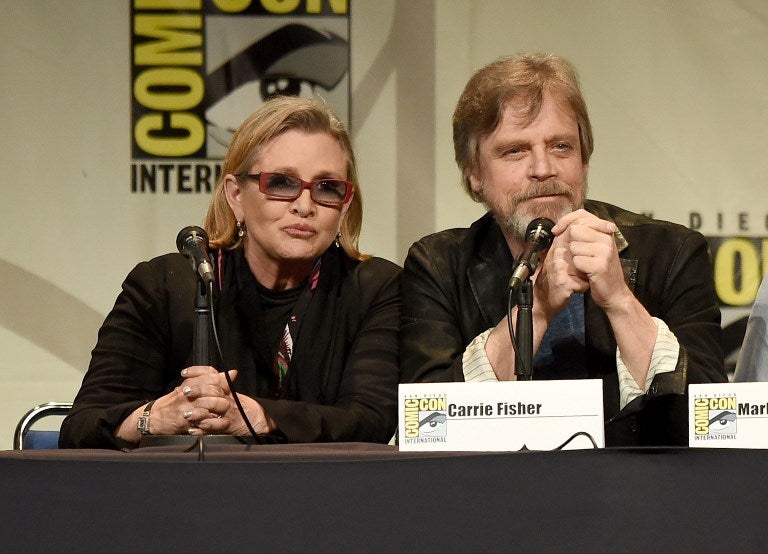 ANAHEIM, California— Mark Hamill has been bestowed one of Disney’s highest honors, but he can’t believe Carrie Fisher wasn’t there to see it.

Hamill and Fisher were named Disney Legends during a ceremony Friday at the company’s biannual fan convention, the D23 Expo in Anaheim, California. He said Fisher would have been making him laugh at the event and treating it with some irreverence.

“Well, I wish Carrie were here,” he said. “She would be making me laugh and be off camera extending her middle finger – one of her favorite gestures.”

Fisher died unexpectedly in December. Hamill said she would want the event to be celebratory and not sad.

“I really wish she were here,” he said. “But, she would also want us to be having a good time and not be sad.”

Hamill said that even hours before the ceremony, he hadn’t wrapped his head around receiving the honor, which was also bestowed Friday to Oprah Winfrey, Marvel Comics legend Stan Lee and others. “Star Wars” creator George Lucas and Johnny Depp were among the Disney Legends inductees in 2015.

“When they told me, I said are you sure they’re not wanting Mark Harmon or Jon Hamm or even Dorothy Hamill?” Hamill said.

Hamill, 65, reprises his role as Luke Skywalker in “Star Wars: The Last Jedi,” which will be released December. Fisher also appears in the film as Skywalker’s sister, Leia Organa, a princess-turned-general.

Disney is expected to reveal new details about the film during a D23 panel on Saturday.

He clarified earlier remarks in which he criticized director Rian Johnson’s decisions for Luke Skywalker in “The Last Jedi.”

“I sort of misspoke when I was talking about how I disagreed with a lot of what Rian had decided for the characters. What I should’ve said was I was really surprised. And I think that’s great. I think the unexpected is great, especially in ‘Star Wars’ films,” Hamill said. “But that’s the challenge. I love doing things I’ve never done before. And even Luke, I think, in this incarnation, is a Luke that people have never seen before.”