Rolando Tolentino, Ricky Lee and Kara Magsanoc-Alikpala stepped down from their posts after the announcement of the first four MMFF selections, all of which included mainstream actors and big production companies.

Diño, chairperson of the Film Development Council of the Philippines (FDCP), praised the three for their “integrity” and said she is “not happy with how MMFF is shaping up this year.”

However, she understands the perspectives of various stakeholders. Despite 2016’s “big achievement for Philippine Cinema,” “unfortunately, the numbers didn’t support that.”

She cited that there were “conflicting views” among the 24-member executive committee, and ultimately, the majority won.

Compared to 2015’s P1 billion, local theaters were hit hard by the “losses.”

“Filmmaking is a business as much as it is an art. The hardest part is to find the balance so we can serve both of its purpose,” she said.

This year, MMFF had a “vision to marry the artistic success of 2016 and commercial successes of the past.” The goal was to find a “more sustainable model without losing the reforms that were introduced last year.”

But now, it seems MMFF is back to promoting movies for the sake of commercial success.

“Walang masamang gumawa ng blockbster (sic) films. Kaso ang tanong, yun ba ang direksyon ng MMFF? (There is nothing wrong with making blockbuster films. The question is, is this the direction of MMFF?)” stated Diño. “Maybe it’s about time to take a closer look into aligning the supposed vision with the real intention of the festival.”

Despite the controversy, Diño has chosen to stay. “This is bigger than myself. As head, I have a duty to serve the entire industry…Pelikulang Pilipino pa rin ang kalahok dito (Filipino films are still a part of this.).”

The statement has received mixed reactions. Activist Juana Change (Mae Paner) called Diño out for politicking or being a “trapo”:

Villarama-Gutierrez said that this year’s decisions were “capitalism at its best.” She described that films which only sought to entertain has an impact on audiences:

“Cinema is a powerful tool to engage and inspire people to find their strength within and not get entertain and glorify the heroism syndrome. Yan ang cinema na nasanay tayo ng maraming taon (this is the cinema we have been used to for many years) and look where we’re at now.” 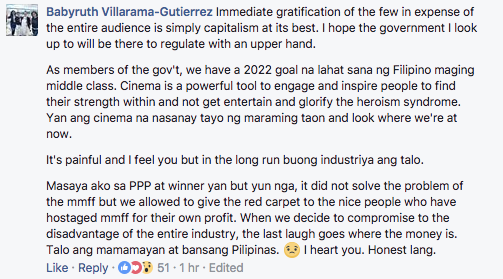 Castro, best known for indie films “Zombadings” and “Endo” called out Diño for the supposed losses of the theater industry. He mentioned that profits were made, but it didn’t go to “Vic Sotto, Vice Ganda, et al.”

He also cited that the lower revenues were due to “less theaters allotted, shorter time frame, and non-MMFF films were allowed to show in provinces; it was likely the more limited cooperation from cinema chains that diminished the possibility for more revenue.”

“Ang Pagsanib kay Leah dela Cruz”-director Flores questioned the “integrity of the process” and argued that the government should be “leveling the playing field for ALL producers” and not just major studios.

“It is not a numbers issue,” said Flores. “It is an issue of fair competition and ethical business practice. Stop protecting some, start protecting everyone.”

Diño commented back that FCDP is only “one seat” in the committee. “Please DO NOT ASSUME that we are not pushing to maintain the integrity of the festival or not making sure we are striving for better commercial films.”

“You can’t start getting them on your side if you are not OPEN to listen,” Diño stressed.

Villarama-Gutierrez also pointed out that Congress already removed certain MMFF execom members who have had cases filed against them, only to be reinstated this year.

Diño stated that the Congress inquiry had no conclusion: “They were not penalized or given any specific sanctions. There was no follow through.”

“I really wished for an executive order to make MMFF nationwide and seal the progressive changes that were achieved in 2015-2016 to hopefully improve 2017. Just sad it went several steps backward,” lamented Villarama-Gutierrez. JB