After the announcement of four official entries to the 2017 Metro Manila Film Festival (MMFF), three executive committee members were reported to have resigned.

Director Erik Matti announced in a Facebook post that film scholar and critic Rolando Tolentino, esteemed writer Ricky Lee, and investigative journalist Kara Magsanoc-Alikpala resigned from their posts on the same day that four entries to this year’s MMFF was announced.

According to MMFF’s announcement, the selections were based on script submissions that were evaluated on the following criteria: 40 percent artistic excellence, 40 percent commercial appeal, 10 percent promotion of Filipino cultural and historical values, and 10 percent global appeal.

Since then, Lee and Tolentino have spoken up on their decision to leave the ExeCom.

Lee states that he chose to join the committee to continue the “reforms” that the 2016 festival started. However, he now sees no reason to stay since recent events make it unclear if these changes will still be implemented.

While a post on Twitter cites that he cannot reveal much because of a confidentiality clause, he says, “There is love like 2017 MMFF script choices: Some old habits are hard to break.”

They are also proof that there was no interest to remove distinctions between mainstream and independent films, and that indie films were the ones that suffered.

He cites that the movie choices were based on those implementing the rules, rather than the rules themselves:

Some online reactions to the MMFF selection have been negative, touting the entries as a step backwards for the film industry, after the 2016 MMFF featured independent films over the usual commercial offerings. 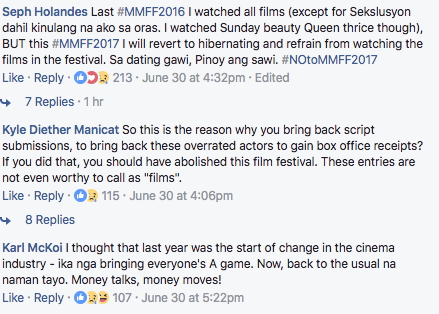 Despite the critical success of the 2016 films, the total gross of the 2016 festival was pegged at P400 million compared to 2015’s P1.3 billion earnings from mainstream movies.

The MMFF has yet to select four more entries which will be based on finished film submissions. The deadline is October 30 for regular submissions, and chosen entries will be announced on November 17, 2017.

The festival is also accepting submissions for the Short Film category until September 1, 2017. Selected short films will be announced on September 29, 2017. JB