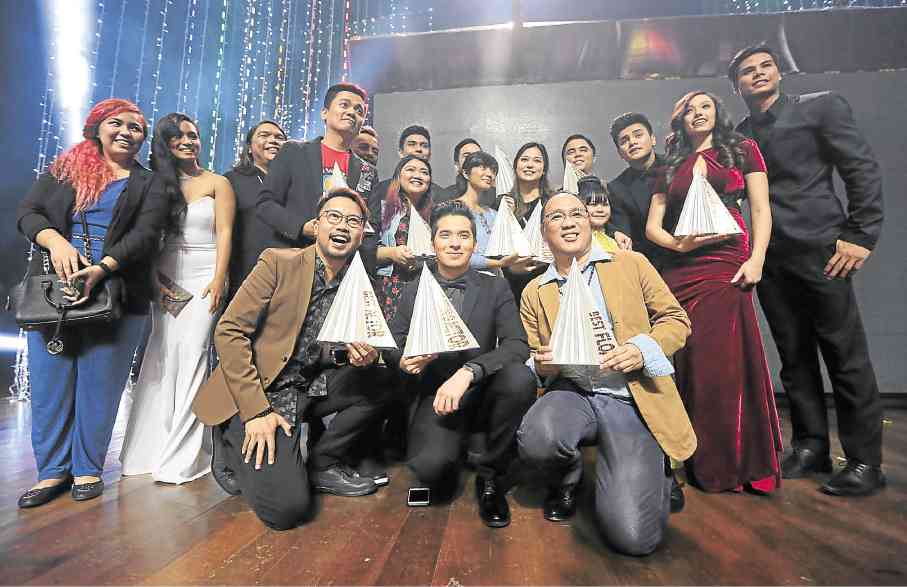 Some of the big winners of the 2016 Metro Manila Film Festival—GRIG C. MONTEGRANDE

As expected, the fest’s defenders swiftly denied the allegation on all forms of media, social and traditional.

In an earlier statement released to the press on Tuesday afternoon, Thomas Orbos, overall chair of the MMFF, declared the 2016 edition “a success.”

Liza Diño, chair of the Film Development Council of the Philippines (FDCP), one of MMFF’s beneficiaries, remarked that the definition of success was “relative” and one had to consider “the production budget of most of the entries.”

“I believe most of them earned from the festival,” Diño wrote on her Facebook page.

Leo Martinez, head of the Film Academy of the Philippines (FAP), another MMFF beneficiary, pointed out that in spite of the lower total earnings, the 2016 subsidy that would be given this year to the five beneficiaries was almost the same as 2015’s amount.

Apart from the FDCP and the FAP, the other fest beneficiaries are the Movie Workers Welfare Foundation (Mowelfund), the Motion Picture Anti-Film Piracy Council, and the Optical Media Board (OMB).

Martinez first revealed the report about the subsidy during last January’s Senate hearing on the MMFF, which was called by Sen. Grace Poe-Llamanzares (who was eventually appointed as a member of the newly organized executive committee of the MMFF).

When Martinez divulged the information at the Senate hearing, it was quickly brushed aside, he recalled.

In an interview with the Inquirer, Martinez recounted that the good news had been relayed to him by MMFF organizers themselves.

“I was told that the total subsidy would be almost the same as last year’s amount, which was P14 million, to be divided among the five beneficiaries,” Martinez explained.

Martinez recalled that he fought for and was able to change the previous practice of distributing the subsidy in tranches. “The funds instead will now be given in full.”

Martinez said that the FAP has yet to receive the 2016 subsidy, though. “It was supposed to be handed out last month.”

Rochelle T. Macapili-Ona, MMFF executive director, told the Inquirer on Thursday that these issues would be discussed in the first execom meeting last Friday morning.

In a statement released on Friday afternoon, the MMFF announced that this year’s total subsidy was P12 million.

The statement also stated: “There is already an Executive Order sent to the Office of the President that will officially declare the MMFF duration from Dec. 25 to Jan. 7.” It is just waiting for the President’s signature, said the statement.
“The office of Senator Llamanzares will also try to take up [the matter] in the Senate,” it added.

Martinez also had misgivings regarding some newly appointed members of the execom.

From last year’s 14, the execom membership was increased to 24. Still, Martinez noted that FAP was not included in the new board. “The five beneficiaries should be represented in the execom,” he noted.

Martinez used to be an execom member until he was barred from the group three years ago. “Perhaps some people hate…that I ask too many questions. I told the MMFF officers that if they didn’t like me, they could appoint another FAP representative.”

Martinez related that Victor Villegas, brother of Dominic Du, was appointed to the new execom.
Former execom members Du and Marichu Maceda figured in the controversy that led to the disqualification of Erik Matti’s “Honor Thy Father” in the MMFF best picture race in 2015.

After being absent for a year, Maceda was reappointed to the execom this year.

“Ed and I were not informed that we would be removed,” Lang told the Inquirer. “Of course, we knew it was possible, even likely. But there was no heads up.”