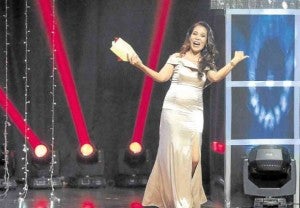 Irma Adlawan is chosen best actress of the 2016 Metro Manila Film Festival for playing a feisty barangay captain in “Oro” while “Sunday Beauty Queen” is picked for the best picture award. The awards ceremony was held on Thursday night at Kia Theater in Cubao, Quezon City. (Photo by GRIG C. MONTEGRANDE/Philippine Daily Inquirer)

A “new era” has dawned in Philippine cinema with the success of Filipino “quality films” at the revamped Metro Manila Film Festival (MMFF), a lawmaker said on Friday.

At the awards presentation on Thursday night, “Sunday Beauty Queen,” the only documentary to be included in the MMFF’s 42-year history, won best picture.

The pageant, held annually on the three-lane Chater Road in Hong Kong Central, serves as a diversion for the women who want to forget their identities as migrant workers, even for a while.

“In the beginning, we felt like we were a bunch of saling-pusa (someone joining an activity though not a full-fledged member of the group),” director Babyruth Villarama said of being the only docu in the lineup.

“It’s a big honor for me to present the stories of these OFWs (overseas Filipino workers) in Hong Kong. I thank them for giving us access to their private homes and lives,” Villarama said.

“Sunday Beauty Queen” is among the eight official entries to the 2016 MMFF.

Recalling the time he agreed to become the executive producer of “Sunday Beauty Queen,” Vincent Nebrida said, “If we didn’t help, it would be like denying our own humanity.”

Nebrida, president of TBA Films, said he was moved to tears after Villarama showed him the first 30 minutes of the documentary. “There was no way we could turn our backs on it,” he said.

He added that he felt “touched” by the messages he read on social media sites, especially from competing directors. “We realized how generous people can be with their positive comments about the film,” he said.

The film is based on true events. It tells the story of four miners who were massacred as a result of a gold mining dispute in Barangay Gata, Caramoan, Camarines Sur province.

The perpetrators are reportedly a group of armed men pretending to be environmentalists. They strike terror in the community under the care of “kapitana” (female barangay captain).

Adlawan said she met the kapitana only after they shot the film. “I asked her if she felt scared because she has been getting death threats even two years after the massacre. The barangay captain said she wasn’t afraid to die and she would do what’s needed to be done for the sake of her people,” Adlawan told the Inquirer.

Her costars in the political drama also copped the best ensemble honor. The film was also given the Fernando Poe Jr. Memorial Award for Excellence.

Ballesteros, a TV host and model who became known for transforming himself into popular Hollywood stars through makeup, failed to attend the awards show at Kia Theater in Quezon City.

“Die Beautiful” won the “My Favorite Film” award (People’s Choice) and the best float trophy. It tells the story of Trisha, a Filipino transgender woman, who suddenly dies while being crowned at a beauty pageant. Her last wish was to be presented as a different celebrity on each night of her wake.

Erik Matti copped the best director award for the horror-thriller that was set in the 1940s. It also won for Anton Santamaria the best screenplay honor.

Quezon City Rep. Winston Castelo, chair of the House Metro Manila development committee, said he was pleased with the performance of the participating films—practically all independent or “indie” movies—at the box office since the festival kicked off on Christmas Day.

“Now it can be said that indie films can make it in the box office during MMFF,” said Castelo, whose committee last year investigated  a number of controversies involving the film festival.

He said this year’s MMFF, which eschewed big-budgeted entries from major studios in favor of smaller productions, proved that indie filmmaking could succeed with enough government support.