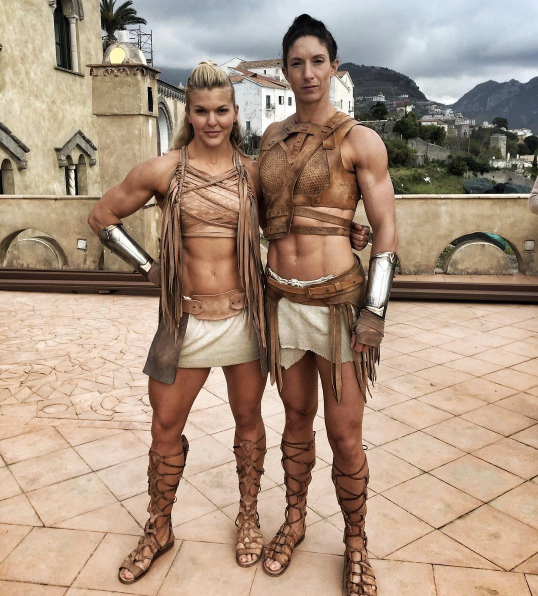 The “Wonder Woman” film, true to its mission to represent women empowerment, cast some of the toughest women in the world as Amazonian warriors.

This included some real-life athletic champions who, much like their characters, have undergone intense physical training for almost their entire lives.

Besides kickass fight scenes, the new “Wonder Woman” film goes into Princess Diana’s history in the island she was raised, Themiscyra. The isolated island is home to some of the most powerful warriors in the world, but what makes it more intriguing is that it is inhabited solely by women.

These women are bred into tough, super-skilled warriors who are also equipped with the understanding to use their fighting skills for good. Who better to portray them than professional athletes and fighters?

Crossfit athlete Hari James and supermodel Doutzen Kroes make an appearance, too. Kroes auditioned for the role and has equestrienne experience. She and cyclist Hayley Jane Warnes played the Queen’s guards.

British actress Jacqui-Lee Pryce, a former amateur boxer and kickboxing champion, felt that her sports background helped her land a role in the movie. “I was very lucky to be cast in this role, as my previous experience with boxing and personal training helped me to stand out from all of the other talent,” she told Lincolnshire Live.

Singaporean Mayling Ng is a martial arts practitioner and joins fitness competitions. She is recognizable as one of the Amazons suspended from the cliff in the breathtaking Themyscira battle scene.

This is the original #orana charge off the cliff🏹💨 #Repost @bigmikeleeder (@get_repost) ・・・ Just watched #WonderWoman, Yes finally #DC gets it right for the first time since the Chris Nolan #Batman movies… Very proud to see my little Scouser from #Singapore sister on the big screen in Wonder Woman..Kick Ass Mayling Ng Mis Ng Onwards and upwards, plan the work and work the plan….but stop trying to make me eat Salad!

Chinese-Canadian Samantha Jo represented Canada in international wushu tournaments and is now a stuntwoman in a number of action films and TV shows. She also had a role in “Man of Steel” as Car-Vex.

Although these powerfully built women are used to the rigors of their sports, they still underwent strength training, stunt choreography, swordplay and horseback riding for months before the film. The goal was to “look like the female version of ‘300’,” said Beijner.

Kroes loved the moment when her own son was impressed seeing her in armor: “I think I melted because he has never looked at me like that ever. He was just in full admiration of his mommy as a warrior.”

The women were also struck at how empowering it was to work together. Ence shared, “The first day we were on-set with all of our swords and shields, it felt like a different type of power. And we looked awesome.”