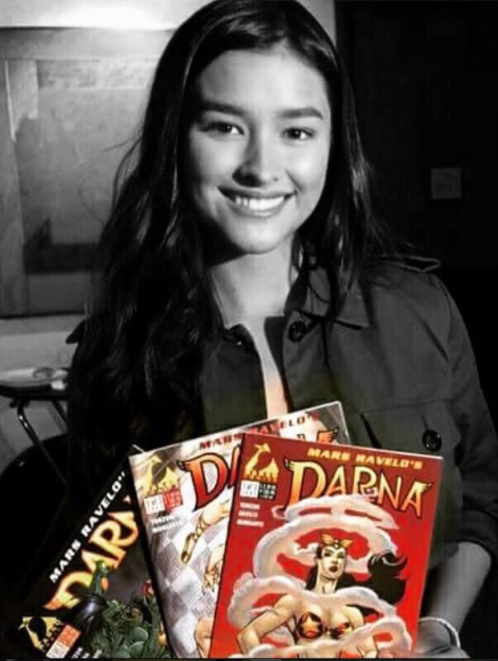 Image: Liza Soberano as posted by Angel Locsin via Instagram

Now that the guessing game is over, Angel Locsin officially and publicly acknowledged Liza Soberano as the new Darna. As a token of her appreciation, she turned over to Soberano her treasured and long-kept Darna comics.

In a recent Instagram post, the 32-year-old actress referred to the comic books as tools that helped her throughout her journey as Darna.

“These three comic books are very special to me. These were given to me way back when I was asked to play the role of Darna for me to get to know the super-heroine better. And for ten years, I kept these,” Locsin said.

She hopes that the books will also give the same guidance to the new Darna.

“Now that we have a new Darna, I asked Tita Malou [Santos] to give these to Liza as my gift hoping they can help her just as they helped me,” wrote Locsin.

Malou Santos is the managing director of Star Cinema, the producer of the newest movie adaptation of Darna.

“I’m hoping that she’ll pass this on to her next successor someday,” Locsin further wrote. “I wish Liza the best of luck! I know she’ll do great.”

In her closing, she relayed her sincerest gratitude to the unceasing love of the Filipinos for Darna. She also acknowledged her former and present home networks, as both had given her the chance to play the iconic heroine. She also acknowledged the Ravelo family, as Darna was conceived and realized by the family’s patriarch, the legendary graphic novelist Mars Ravelo.

(For the last time, a big thank you to everyone for your love for Darna. Thank you to my former (GMA) and present (ABS-CBN) network, and to the Ravelo family for the opportunity [they gave me].) 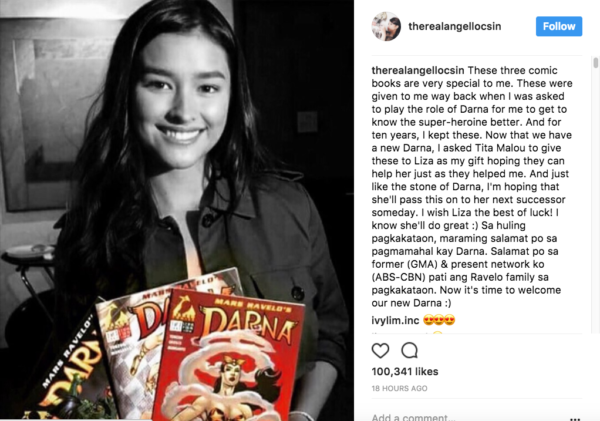 (Those [Darna] magazines were given by Angel Locsin. It means that Angel likes Liza to portray Darna.)

He also quoted Soberano to have said, “‘Di pa po kami uli nagkikita. Pero ‘pag nakita ko po siya, I will thank her po for the opportunity and these Darna komiks.”

(We [Angel Locsin and Liza Soberano] have not seen each other again yet. But if I see her, I will thank her for the opportunity and for these Darna comic books.) JB

Liza Soberano’s camp on her being Darna: ‘No confirmation yet’

Liza and Enrique: Choose partner who’s attractive inside and out

LOOK: Beauty runs in the family for Liza Soberano

Read Next
Chloe Grace Moretz apologizes for ad accused of body shaming
EDITORS' PICK
Palace: Malls, establishments may require customers to use of face shields
Syringes for Pfizer vaccine arriving on December 2 — NVOC chairperson
Smart offers wireless fiber-like speeds to Filipino homes with country’s first 5G Prepaid Home WiFi
Legarda: Ending Violence Against Women, a cause for all
This new condo in the South will make you want to turn a new leaf
Disease expert: Omicron variant may behave like Delta
MOST READ
Bongbong Marcos to face another disqualification case
Christine Bersola, Julius Babao cleared of cancer after colonoscopy, endoscopy
Former PM Abe says Japan, US could not stand by if China attacked Taiwan
Tropical storm intensifies as it approaches PAR
Follow @CAbanillaINQ on Twitter
Don't miss out on the latest news and information.