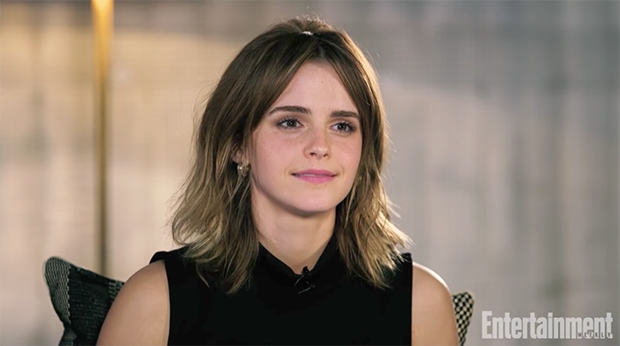 Emma Watson may be used to having interviews since she was a child, but this one may be her cutest yet.

For an Entertainment Weekly feature, the “Harry Potter” star took on some of the toughest interview questions—from young kids. One of them even addressed here as “Belle”, her character in this year’s “Beauty and the Beast” adaptation.

She answered questions like what her favorite books were, who would win a duel between Harry Potter and Darth Vader, and whom she would invite as a dinner guest.

She shared that her dad would read to her constantly, and her childhood was made up of Roald Dahl books like “James and the Giant Peach”. A Potterhead herself, the “Harry Potter” series was read to her until the third book. “My idea of how all the characters sounded, how all of their accents were…were really from my dad.”

A five-year-old asked her if she liked the Beast. Emma admitted she had reservations initially. “He was a) pretty scary, and b) pretty rude. So not so much from the beginning. But I could tell he was grouchy and mean because he was really sad… things got better.”

She also said he was one of her favorite characters in the movie. “Beast is this wounded person that is redeemed,” she explained.

She was Team Harry Potter all the way when asked who would win between the young wizard and one of the greatest movie villains of all time, Star Wars’ Darth Vader.

“Harry Potter obviously, definitely,” she said without pausing. “You’ll only get so far in life when you’re cold and dry and mean. You’re not gonna win in the end.”

When asked whom she’d have over as a guest, the 27-year-old said she would love to have a “quick chat” with former United States First Lady Michelle Obama.

Besides acting, Emma is known as an activist and role model to the youth, and currently holds the role of United Nations Women Goodwill Ambassador to advocate gender equality. JB

On ‘Beauty and the Beast’ set with Emma Watson

Emma Watson to critics: Feminism is about giving women a choice