On ‘Beauty and the Beast’ set with Emma Watson 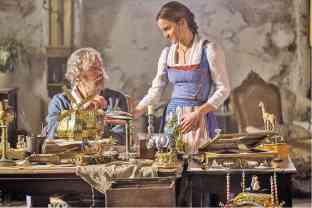 Kevin Kline and Emma Watson in “Beauty and the Beast”

LOS ANGELES—“I have these moments when I feel the pressure from my 7-year-old self, when I can hear her voice, [saying] ‘That’s not right,’ or I don’t meet her expectations. That’s been really interesting for me.”

Emma Watson, in Belle’s blue and white dress, was giving her usual thoughtful, nongeneric answers on the “Beauty and the Beast” set at Shepperton Studios, located outside London. It was July 2015.

Sitting on a stool during a filming break, Emma continued talking about the little girl in her who loved the heroine in the 1991 Disney classic—the first animated film to earn an Oscar best picture nomination. Playing a favorite animated character from her childhood—not to mention a certain wizarding school girl from her well-thumbed books—poses an extra challenge to the actress.

“It’s definitely an added layer of pressure which I was familiar with on ‘Harry Potter’ because I was a big fan of the books before I was cast,” Emma said.

“To be in this unusual situation for the second time is very unique,” she said about getting to play Hermione Granger and now, Belle, in the live-action remake of “Beauty and the Beast.” “I’m not sure many actresses have had the chance to play their own personal heroes twice in their careers.”

Emma’s mention of “Harry Potter” reminded us that we also visited her when she was a young girl playing Hermione at Leavesden Studios, about 45 kilometers (28 miles) away from Shepperton.

Wearing brown boots that contrast with Belle’s dainty flats in the animated version, Emma explained, “We wanted to make her very active in all of the scenarios in the film and very much at the center of her own destiny. So how do we do that?

“It’s very much perfected in her costume choices. I’m actually wearing it. Belle has bloomers underneath all of her skirts. She actually walks around with one side of her skirt hiked up so that if she needs to horse ride, to throw her leg over a horse or to fix something, she can do it.

“She wears proper riding shoes because Belle is an equestrian. She’s actually a very good horse rider. We also created pockets for her so that she could always be carrying a book with her all the time. It functions as a tool belt so that she can have paintbrushes, tools, food and whatever it is that she needs with her. She’s incredibly practical, very industrious and athletic—maybe a way to advance her from the original.”

Gutsy is the word to describe Emma, who was quoted as saying that her only “major” public singing stint was in school when she was 12. To sing Alan Menken and Howard Ashman’s (plus new material that Tim Rice wrote with Alan) tunes was a dare that Emma bravely took on.

“I’ve always wanted to sing,” the Paris native said. “It’s something that I talked about on the first ‘Harry Potter’ film. I wanted to get to sing and dance. So this has been a dream come true for me. I started singing lessons in January (2015). We started shooting end of March. So I had three-month lead-up prep where I got myself into a place where I felt confident enough to sing publicly, in front of a room of people.

“It was really just about strengthening and broadening out my tone and voice. I’m actually going to keep the singing lessons, going past the end of the filming because I found it actually had strengthened my voice, even just my speaking voice. It had given me more range.”

Emma revealed a trade-off she had with her director. “Bill and I had a deal—that I would make him this demo of my singing voice for Belle.

“In return, I wanted a new draft of the script which reflected the initial conversation we had in our first meeting which was … to make sure that without the magic and the ball gowns, there was really a story that was character-driven and that there would be proper dramatic scenes.”

In our tour of the studio and the majestic sets, we saw the crucial ball gown that Emma wears to her dinner and eventually, the pivotal dance, with the Beast (Dan Stevens). (Luke Evans, Josh Gad and Kevin Kline costar.)

“We initially started off with the sense that it should look like a dress from the 1750s,” Emma said of the satin organza gown, printed with gold leaf and glitter, that she collaborated on with costume designer Jacqueline Durran. “But we very quickly realized that the dress didn’t ‘dance’ beautifully.

“We decided that the most important thing for the dress was that it would almost fly; it would almost be like a third character in the sequence. So what’s so special about this dress is that Belle becomes a bird when she’s wearing it. It completely floats. It moves beautifully.”

Emma is grateful to her “Harry Potter” filmmaking experience, which prepared her to work with “Beauty and the Beast’s” CGI characters.