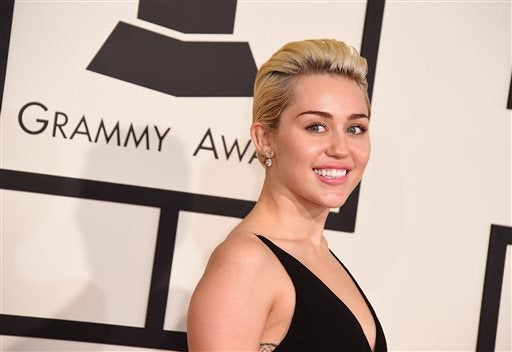 Miley Cyrus arrives at the 57th annual Grammy Awards at the Staples Center on Sunday, Feb. 8, 2015, in Los Angeles.  AP

In an interview with Billboard, the “The Voice” coach said she would drop her single titled “Malibu,” which is due on Thursday (Wednesday in the US). Named after the sunny California beach where she currently lives, Cyrus composed the “breezy love song” for current beau Liam Hemsworth while she was commuting to the set of the reality singing show.

“I drive myself everywhere, but that day I decided to Uber,” she told the news site. “I was trying not to sing out loud because someone else was in the car.”

For her forthcoming album, fans can expect Cyrus’ other masterpieces to be drawn from her personal experiences. Cyrus penned a song for former Presidential candidate Hillary Clinton and another one about women in the workplace.

“This is Miley leaning into her roots more than I’ve ever heard,” Cyrus’ dad Billy Ray described her soon-to-be-released songs. “For her, this is honest.”

Not surprisingly, Hemsworth vastly influenced her new music and “pacified” behavior. After temporarily calling off their engagement in 2013, she blew off Hollywood by sporting a boyish hairdo and posting nude pictures on social media.

“I needed to change so much. And changing with someone else not changing like that is too hard. Suddenly you’re like, ‘I don’t recognize you anymore’. We had to re-fall for each other,” she said.

Cyrus shot into stardom by playing the titular role in Disney Channel series “Hannah Montana.” While branching out as a “raunchy” pop star famed for her twerking antics, she dropped hits such as “Party in the U.S.A.,” “Wrecking Ball” and “We Can’t Stop.”  Gianna Francesca Catolico /ra