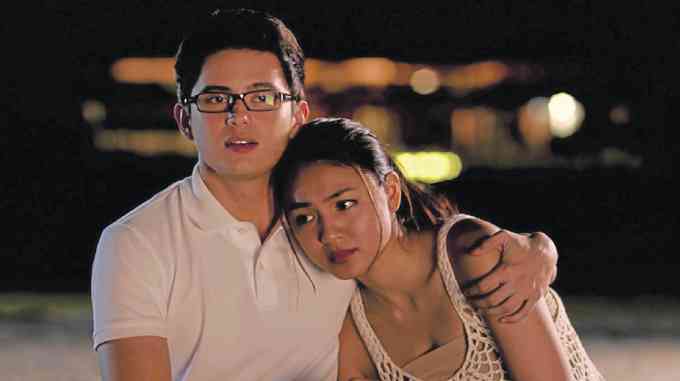 Just as the camps of James Reid, Nadine Lustre and their management Viva Artists Agency (VAA) refuted the claims of irate concert producer Elaine Crisostomo, she struck back and showed more proof of the alleged “rudeness” from the JaDine team.

When news of alleged ‘rudeness’ of the love team to concert producer Elaine Crisostomo (a.k.a Coach Alex) and staff of Entablado Production came out, the JaDine camp immediately issued its clarification of the issue and vehemently denied Crisostomo’s claims.

Instead, the JaDine camp claimed that it is actually Crisostomo who owes them money (because of a supposed lunch date that made fans wait for over five hours), and not the other way around. 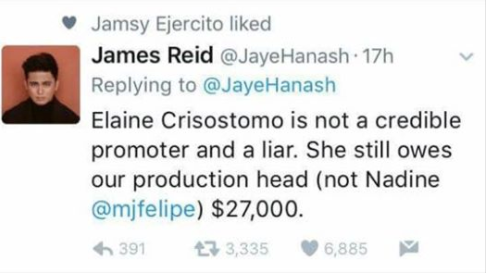 The young heartthrob also released an official statement via VAA’s Instagram account, giving an apology to the fans regarding the controversial lunch date which was “never approved” and he “did not know about until the day after.” 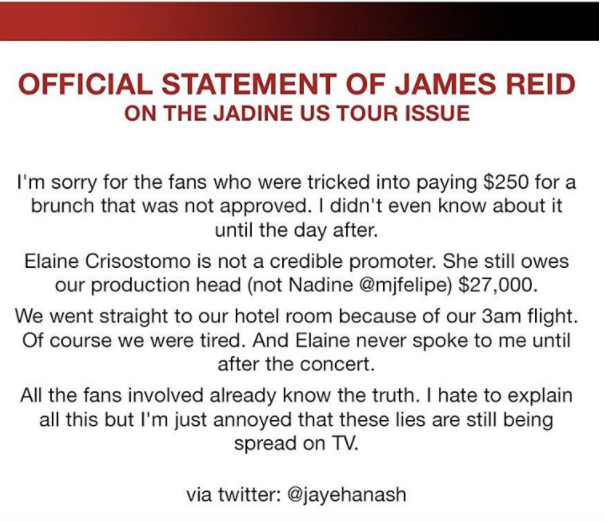 Crisostomo also slammed Reid for misinformation as she further asserted her being a producer:

(I am a producer, not a promoter. A producer who worked on the JaDine tour. A producer who arranged for the venue, hotel, media, people and the transportation for you. A producer who paid the venue, technicals, your talent fees and your food for four days. Now, I am the liar and the one who’s not credible? How dare you Mr. Reid!)

The feisty producer then released a copy of the “hospitality rider” of the concert day itself, and revealed the management’s request to have beer on stand-by.

“Hospitality rider, sa mismong concert! Dapat ba may beer? Yan ang mga request sa producer (A hospitality rider on concert day! Does there really have to be beer? Those are their requests to [this] producer,” she said.

In continuation, she posted part three (page three) of the rider.

As to the controversial lunch date with the fans, in response to Viva’s claim that there was no such lunch date agreed upon between them and recognized promoter Nancy Yang, Crisostomo showed a letter which supposedly proves the agreement. 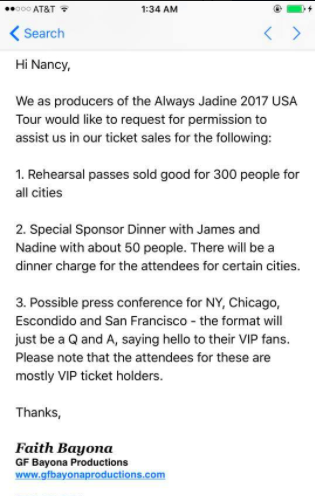 Meanwhile, JaDine’s tour management, GF Bayona Productions, released its official statement, saying that the “paid luncheon with JaDine fans organized by Entablado was not an approved activity and was not coordinated properly,” supporting Reid’s statement. 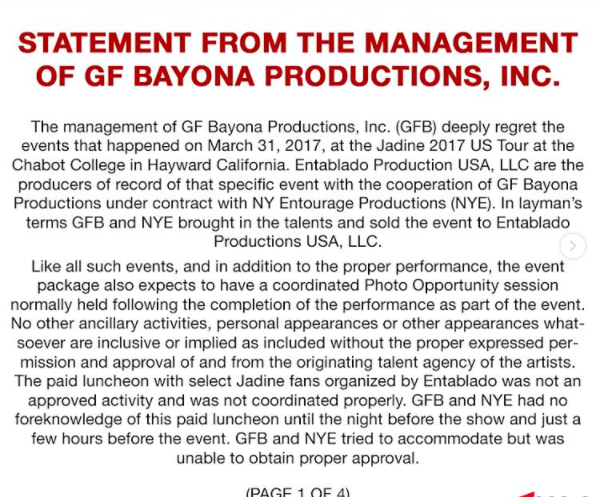 Image: Screen grab of statement from the management of GF Bayona Productions Inc. on the JaDine Tour 2017 issue via Viva Artists Agency Instagram

Because of Bayona’s denial, Crisostomo fired back. She said that it was actually Bayona and the promoter who were discussing the luncheon/dinner via email, and that she was merely copy furnished. Crisostomo said she merely followed the agreements of the two. She also showed further proof of discussions about the alleged lunch date. 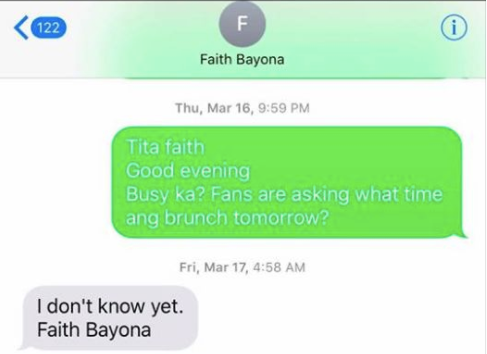 To further prove that Bayona and Yang knew of the lunch date agreement, Crisostomo posted a photo showing Bayona with the waiting fans. 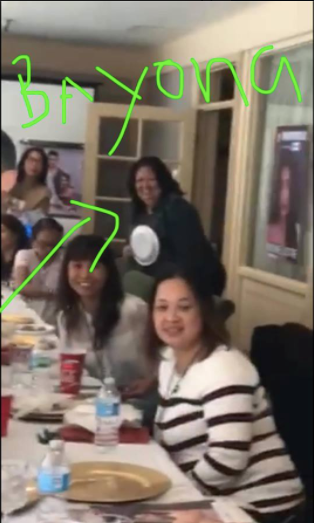 In what seems to be a text message from Nancy Yang, an itinerary with an 11 a.m. lunch date was indicated, and the partly unread message above looks to be Yang’s foreword on a detailed set of JaDine activities. 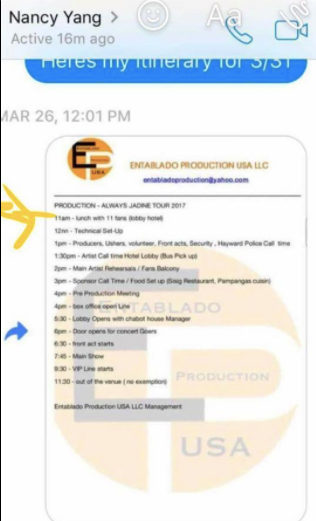 Viva has earlier released a statement completely disproving Crisostomo’s claims, saying that it has never communicated with her and her company, making her statements “inaccurate and wrongfully directed” to Reid and Lustre.

Earlier posts of Crisostomo concerning the JaDine tour on her Facebook page have been deleted. JB