Beams of light pierced through the air. Pyrotechnics lit up the night sky. And with every song, the crowd responded with deafening roars.

And in the middle of it all was the man of the night, Chris Martin, the affable frontman of the British pop-rock band Coldplay who indefatigably led a two-hour musical and visual spectacle Tuesday night at the SM Mall of Asia concert grounds.

The much anticipated, one-night concert was part of the Asian leg of Coldplay’s “A Head Full of Dreams” tour, which kicked off in March last year, in support of the band’s seventh album of the same title. 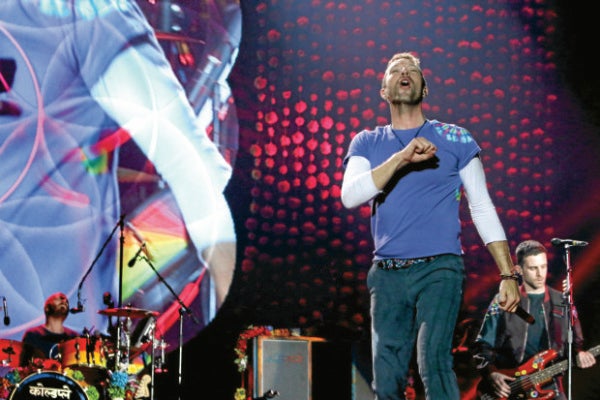 Tickets to the show ranged from P22,500 for a coveted spot at the VIP section, to P1,800 for general admission.

Gates were scheduled to open at 5 p.m., but, as expected, fans started to arrive way earlier; not a few people were already camped at the venue’s perimeter as early as 12 noon.

Celebrity concertgoers spotted among the crowd were  Sarah Geronimo and Matteo Guidicelli, who were hounded by selfie-seeking fans, as the couple made their way toward the entrance.

Security was strict, with about 500 uniformed policemen deployed in and out of the venue, according to reports. The show organizers had also released an extensive list of prohibited items, which include medication and illegal substances, professional video and audio equipment, big bags, and selfie sticks.

READ: Coldplay rides jeepney to MOA grounds ahead of concert

Martin is beloved, not only for his music, but also for the effort he put into forging a genuine bond with his fans. And so, while he was neck-deep in preparation for the concert, the singer still managed to squeeze into his busy schedule a visit to a supporter battling a grave illness.

Ken Valiant Santiago, a 21-year-old medical student at the University or the Philippines-Manila, was one of the first to line up for tickets upon learning that Coldplay would be making a stop in Manila. However, he had to forego the show, after being diagnosed with stage 4 cancer, in February.

Determined to make his brother feel better, Kheil Vin Santiago, wrote an open letter on Facebook, asking the band for a short message — or even just a “hi” — for Ken.

They got more than that.

Luckily, the post reached the concert promoter, MMI Live chief executive officer Rhiza Pascua, who in turn arranged a meeting between Martin and Santiago, who is currently confined at the Philippine General Hospital.

Because Ken’s delicate condition prevented him from attending the concert, Martin himself went to him.

“Ken was very surprised. We had no idea Martin was going to visit; we knew he was already very busy. We didn’t expect anything, but Miss Rhiza and Martin made this possible,” Kheil told the Inquirer in an interview.

While Ken couldn’t fully speak, he and Martin managed to have a chat using a drawing slate.

Martin asked Ken which song he would like the band to play during the show. Ken chose “Ink,” from the album “Ghost Stories” (2014).

“He’s a true blue fan,” Kheil said of Ken, whose favorite pastime in the hospital is listening to Coldplay songs. “Martin immediately texted his band mates to practice Ken’s request.”

And that’s the on top of the various goodies and souvenir Martin brought for Ken.

“I can’t thank you enough…thank you will all my heart,” Ken wrote on his board.

Wishing for something like this in the days ahead! Who loves this #GlobeColdplay x #GlobexChainsmokers song as much as we do? 💙 pic.twitter.com/Ky9GmKkY6y