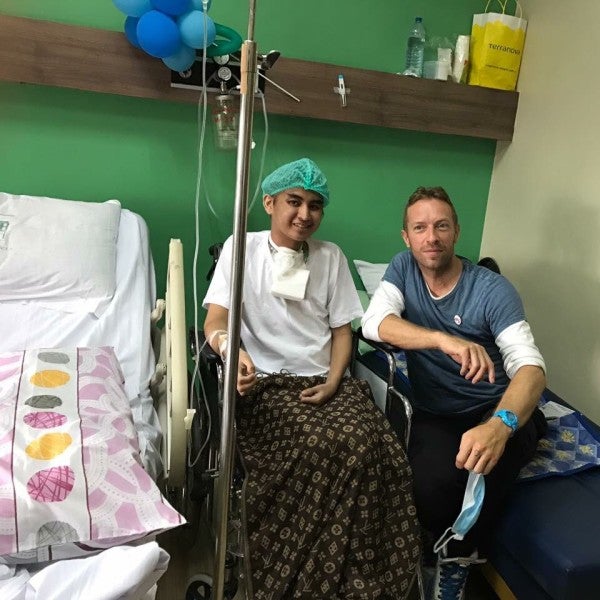 All he wanted was a simple “hi.”

Hours before their much awaited concert in Manila, Coldplay frontman Chris Martin took the time off his tight schedule to pay a visit to a cancer-stricken fan at the Philippine General Hospital (PGH).

Concert promoter Music Management International (MMI Live) head Rhiza Pascua posted a photo of Martin with Ken Valiant Santiago, a medical student at the University of the Philippines-Manila who was diagnosed with Stage 4 Cancer just in February.

“Chris Martin, you are an angel!!! Thank you for making Ken very happy!! #youKENdoit #HymnfortheweeKENd,” Pascua wrote in the caption.

Last month, Santiago’s eldest brother Kheil took to social media to share his story and requested the British rock band to “say hi or a give short message to make him feel better.”

He waited in line for 14 hours to buy his ticket.

Last February, however, he was diagnosed with multiple tumors in the lungs, and is currently undergoing chemotherapy while confined at PGH.

He gave away his ticket to a brother.

“Since the Coldplay started, my brother Ken has been an avid fan. The moment Coldplay announced that they will be having concert in the Philippines, Ken was very much excited to buy tickets. He was the one who bravely lined up early to buy your tickets,” Kheil wrote in the now viral open letter.

“But just last February, he was diagnosed with Stage 4 cancer. It was a very shocking news for everybody because he was a very normal man, a very generous, kind, loving, and most of all a God-fearing one. We did not expect this to happen. Every day in the hospital his hobby is to play music from Coldplay. Some of his favorites are ‘A Sky Full of Stars,’ ‘Adventure of a Lifetime,’ ‘Hymn for the Weekend,’ and ‘Everglow,’” he added.

Coldplay’s “A Head Full of Dreams” Manila concert, which has sold 35,000 tickets, is expected to be the biggest live event in the country this year. IDL

WATCH: Pinoy couple gets engaged during Coldplay concert in Singapore