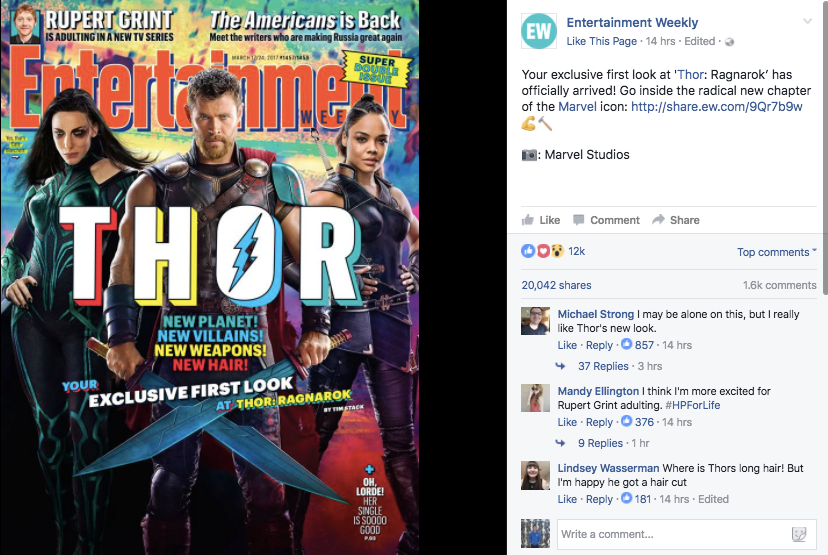 Aside from commanding thunder and lighting with his magical hammer Mjolnir, the Asgardian Prince Thor is best known for his signature golden locks.

But in the recent photo for the upcoming Marvel film “Thor: Ragnarok,” the titular character (played by Chris Hemsworth) is seen with a much shorter haircut.

In an exclusive interview with Entertainment Weekly, the 33-year-old Australian actor described his new makeover for the much-awaited third stand-alone film featuring the Norse god.

“It was nice not to have to sit in the makeup chair for that hour each morning,” he told the news outlet.  “It felt like a rebirth for me as the actor but also as the character.”

“I have a belief that if you’re lucky enough to get to part 3 of a franchise, it is your obligation not to fall to threequel-itis,” he said.

The Marvel executive even divulged key plots of the upcoming film, sharing that Hela will send Thor to a place called “Sakaar” where he is forced to become a glorified gladiator.

“[Sakaar is] basically where every wormhole across the universe dumps out its trash, so you get people from all walks of life with all sorts of incredible abilities and powers,” Hemsworth explained.

“No one cares what prince or king Thor may have been in another world. Also, his strength is pretty easily matched with those he finds himself amongst.”

Despite the film’s seemingly complex plot, Hemsworth assured viewers that the Ragnarok film will mark a decidedly more comedic installment for the series—much in part due to to director Taika Waititi.

“Taika has such a quirky, left-of-field sense of humor, which forced all the characters and the tone of the whole story to head in a new direction,” said Hemsworth. “Each day we were like, ‘Are we pushing it too far? Are we allowed to have this much fun?’”

“Thor: Ragnarok” won’t come out until Nov. 3, but by the looks of it, it may just be the franchise’s best instalment yet.  Khristian Ibarrola /ra