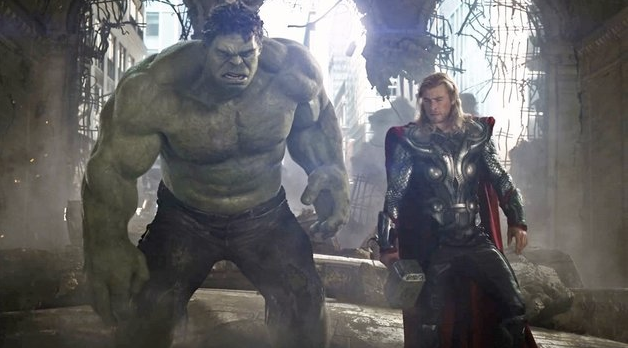 Marvel Studios is usually mum when it comes to divulging plots from its critically acclaimed cinematic universe, but news of two strapping titans going at it is simply too good to keep under wraps.

The studio behind the Earth’s mightiest superheroes has revealed that Chris Hemsworth’s Thor will indeed battle it out with his co-Avenger ‘The Incredible Hulk’ (Mark Ruffalo) in the third instalment of the ‘Thor’ franchise.

Get ready for Marvel Studios’ “Thor: Ragnarok” with a new photo and synopsis! Details: https://t.co/yxUA9ipIh6 pic.twitter.com/hIQtTeWlMe

Following the events of “Avengers: Age of Ultron”, the Asgardian prince must duke it out to save his planet—minus the help of his trusted Mjolnir—Marvel revealed on Sunday (Monday in Manila).

“In Marvel Studios’ Thor: Ragnarok, Thor is imprisoned on the other side of the universe without his mighty hammer and finds himself in a race against time to get back to Asgard to stop Ragnarok — the destruction of his homeworld and the end of Asgardian civilization — at the hands of an all-powerful new threat, the ruthless Hela,” the studio’s subsidiary, Disney, disclosed in a statement.

“But first he must survive a deadly gladiatorial contest that pits him against his former ally and fellow Avenger — the Incredible Hulk!”

Apart from the ally-on-ally clash, Marvel also revealed its latest female villainess Hela who will be brought to life by Cate Blanchett.

In a separate report from The Huffington Post earlier this year, Hemsworth actually foreshadowed the plot, by claiming that if Thor didn’t have his hammer, he’d want Tony Stark’s ‘Hulk-busting’ suit.

“That would come in handy, wouldn’t it?” he said.

The volatile pair was visibly missing in action during the events of “Captain America: Civil War” in April, and the upcoming film will finally put the two favorites back in the spotlight.

By the looks of it, “Thor: Ragnarok” seems to also be taking some cues from comics’ Planet Hulk series, which first debuted the gladiatorial battles in outer space.

As of this writing, it still remains unclear if Thor’s mischievous brother Loki (Tom Hiddleston) will return in the film.

“Thor: Ragnarok” is directed by  Taika Waititi and is slated for release on Nov. 3, 2017. Other Marvel films showing in cinemas soon are “Guardians of the Galaxy Vol. 2” in May and “Spider-Man: Homecoming” in July. Khristian Ibarrola