Albie Casiño on Andi Eigenmann: 'Being civil is different from being okay' | Inquirer Entertainment

Albie Casiño on Andi Eigenmann: ‘Being civil is different from being okay’ 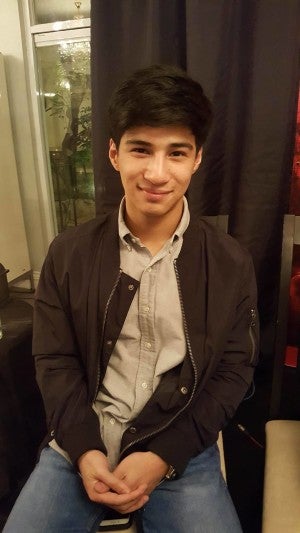 Even after vindication from years of public shame due to paternal issues with ex-girlfriend Andi Eigenmann, Albie Casiño says he’s moved on and is indeed civil with her—but being “okay” is not how he would describe the situation.

At the grand press conference for Regal Films’ first horror offering for 2017 last Tuesday (February 21), “Pwera Usog”, which also stars Casiño, he once again answered issues regarding his paternal disputes over Eigenmann’s daughter.

After all the nasty intrigues, the ex-lovers were reportedly at least already able to privately talk to each other, although the actor did not reveal too much about it.

“I’m not gonna pretend like there’s no history. Casually, napag-usapan [We’ve talked about the issue casually]. Being civil is different from being okay. I’m just a civil person,” he said.

While being interviewed, dismay over the issue was still clearly evident on the actor’s face as damage has been done to him.

(Whatever she [Andi Eigenmann] does, she cannot turn back time, [so] there’s no point.)

Nonetheless, whatever damage the issue with Eigenmann has done to him, he says he holds no anger anymore.

(What should I do? I would just be destroying my own self if I hold on to anger.)

Fans and media people have always wondered if the actor has ever felt any “lukso ng dugo” over Eigenmann’s daughter but the actor just innocently denies any.

“Ni lukso ng dugo wala talaga (I did not feel my blood stirred at all.),” he said.

But when asked if he’s ever really sure from the very beginning if the child was never his, “You’re never 100 percent sure of anything but I don’t really think it’s mine,” he said.

Career affected by issue with Andi

With a budding career at the time of his relationship with Eigenmann, everything was quickly lost after he was publicly misjudged, causing his sudden departure from showbiz.

(Of course [my career] was derailed. I went on hiatus for a while. For a long time, I lost a lot of work. There was so much lined up for me and all of a sudden, all of those projects vanished.)

On Jake Ejercito: ‘I don’t have anything to do with him’

Just as many were curious how he is with Eigemann, a number of fans also want to know if he had ever met or communicated with Jake Ejercito, who in an unexpected podcast guesting of Eigenmann’s half sister Max Eigenmann, was revealed to be the child’s real father.

“I could care less about that guy. I don’t have anything to do with him. Anong sasabihin ko sa kanya? Anong pagusapan namin? (What will I say to him? What will we talk about?)” he said.

However, Casiño admits that he had once encountered Ejercito, only when he “saw [Ejercito] in a bank.”

Happy with his lovelife

Meanwhile, despite the emotional roller coaster he’s been through, the 23-year-old actor says he is happy with his non-showbiz girlfriend.

“I’m very happy right now, just how I like it, non-showbiz,” he said.

The actor did not reveal much but says he had separated once from his lady love and that they just got back together.

“Nung nakilala ko nga siya, ‘di niya alam na artista ko eh.  ‘Yun ‘yung mga gusto ko (When we first met, she did not know I was an actor. That’s what I like.),” Casiño said. JB