Fil-Am mom and son enjoy ‘King and I’ US tour 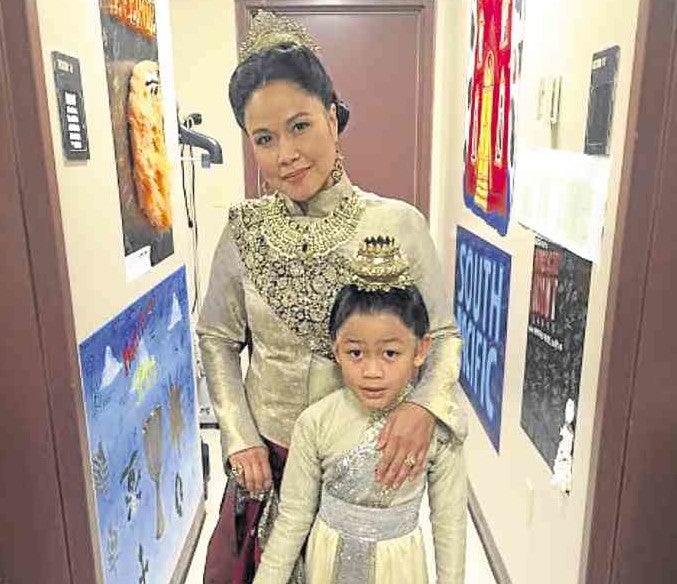 LOS ANGELES—A Fil-Am mother with extensive theater credits and her 8-year-old son are enjoying life on the road together as cast members of the national Broadway tour of “The King and I.”

Joan Almedilla plays Lady Thiang in the tour version of The Lincoln Center Theater’s Tony award-winning revival of Rodgers and Hammerstein’s beloved musical. At such a young age, CJ is already on his first national Broadway tour as one of the 10 child actors in the show. CJ, who has racked up acting credits, sings and delivers a few lines along with the other kids in the sumptuous revival set in Bangkok.

The Cebu-born mom, who has starred in Broadway, national tours and regional productions of “Miss Saigon” (Kim), “Les Miserables” (Fantine) and “Jesus Christ Superstar” (Mary Magdalene), told us that she couldn’t believe it when both she and CJ landed the roles and the rare opportunity to traipse across the US while doing something they both love—performing.

Since the tour was launched in Providence, Rhode Island, in November, Joan and CJ (who plays one of the royal children) have been making the most of their city-hopping schedule, exploring what each stop has to offer before each evening performance.

The cast, led by Laura Michelle Kelly (Anna) and Fil-Am Jose Llana (King), and the production have been earning rave reviews from Providence, San Francisco, Los Angeles (where Joan and CJ live with his dad, filmmaker-editor Charles Uy) to Seattle.

“Almedilla’s Thiang is fully mistress of her own household, with regal bearing and real influence in the royal court.”

LA Weekly declared about the child actors: “The supporting ensemble, including its delightful youngest members, is lovely, lithe and captivating throughout.”

CJ has adapted well to life on the road like a seasoned performer. He said: “We like to practice math quizzes while walking together. I like staying in hotel suites with my mom. We play games.”

Next stop for the duo: Cleveland and then to more cities, including Chicago, Washington, DC and Miami.

How did you and CJ end up being cast? It was via taped-audition a few years ago for me. My agent also found out that CJ has been acting in Los Angeles. They requested a taped audition. His audition song was “Yesterday” by The Beatles.

Did you have any apprehension about being on the tour with CJ? He’s used to acting on camera, which is a different process.

What has it been like so far to be on the road with CJ? Just beyond amazing. We’re learning about different cultures in every city.

What has been the most surprising thing so far in your life with CJ on the road? Lately, he’s been asking so many questions about our country. Recently, he witnessed an actual protest (Women’s March) for the first time.

The funniest moment so far? Seeing him in hallways outside of our dressing rooms when he’s being silly with his friends … At the opening night party, he danced like the Jabbawockeez.

The most memorable moment? While in rehearsals in New York, there was a man making huge bubbles in Union Square. I remember CJ happily playing with other kids.

The LA stop must have been a special time. It was great being able to perform back on the Pantages Theatre stage, with CJ this time around and to have all our local friends see the show.

Is CJ home-schooled by you? Or is he provided a private tutor? Back in LA, I started homeschooling him at 4 years old. We have two teachers who travel with us, one for the higher grade levels and another for the little ones.

What’s a typical day like for you and CJ when there is a performance in the evening? He has school from 12 to 4 p.m. on weekdays. We have breakfast, lunch and early dinner together. While he’s in school, I try to do my workouts or just have “me” time.

How do you both wind down after a performance? Hot showers always work! We make up stories. CJ likes to draw until he falls asleep.

What’s life like in hotel rooms? We build forts, do math exercises and play games.

What do you miss already about being at home? My kitchen!

CJ is looking forward to meeting Winter, from the movie “Dolphin’s Tale,” a bottlenose dolphin with a prosthetic tail, that lives in Clearwater, Florida.

TAGS: Celebrity, Entertainment, news, The King and I, US