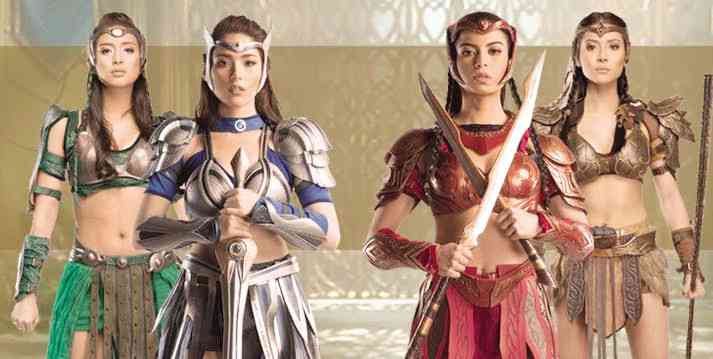 The 20 most popular TV shows last year have all sorts of instructive and cautionary lessons to teach interested and concerned viewers—if they bother to look for significance beneath the ratings surface:

At the top of the most-viewed list is “Ang Probinsyano,” with 40.0 percent. Why is the longrunning drama-action series more popular than the 30-plus other teleseryes on the tube? Because of its unique action component, and its furtherance of the “iconic” FPJ vibe (for today’s audience, with Coco Martin doing the more youthful honors).

Yes, true action come-on, plus a lot of fantasy effects, has also been pushed by “Encantadia” and “Alyas Robin Hood,” but only after “Ang Probinsyano” revived the trend.

Still, it’s pertinent to note that the two other action-oriented series are also on the Top 20 list. Conclusion: Action is “in,” so expect more new proponents this year, like “Mulawin vs Ravena” and “La Luna Sangre.”

Also a top draw last year was “The Voice Kids” at 37.6 percent, indicating the strong appeal of kiddie programs that similarly have a musical component to them. Following that logic, the currently ongoing “Your Face Sounds Familiar” kiddie impersonation tilt should do well, indeed.

In third place last season was another teleserye, “Pangako sa ‘Yo,” at 36.4 percent, followed by the rom-com-drama, “Dolce Amore.” The good showing of “Pangako” was expected because it was the remake of a big hit—and also topbilled the fave “KathNiel” (Kathryn Bernardo and Daniel Padilla) love team.

More of a pleasant surprise was “Dolce Amore’s” 33.8 percent rating, which can be attributed to its similarly popular love team (Liza Soberano and Enrique Gil), as well as to its “foreign” component (some scenes were shot in Italy).

The “lesson learned” in this instance is that TV series and shows shot abroad have become more popular than ever, thanks to some viewers’ abiding or even “deathless” colonial mentality, or preference for anything “imported” (or, in this case, “exported”).

In this connection, we note that the new TV series, “A Love to Last,” is also sometimes set abroad (this time, Germany), so it should similarly benefit from this “retro” bias.

Next on the ratings list is a talent tilt, “Pilipinas Got Talent,” another feather in the cap of the “competition” program format (31.9). This is further bolstered by the success of “Dance Kids” (31.0).

The next major preference to emerge is fantasy, with “Wansapanataym” rating  30.7. This is underscored by the similarly strong showing of the new “Encantadia” at 23.3.

“TV Patrol” is the first newscast to get into last year’s list of top raters, at 30.6. Another newscast that did well was “24 Oras” at 20.3. The fact that only these two got into the “most viewed” list says “something” about viewers’ top priorities for watching TV.

Summing up: If a 2017 producer wants his TV show to click, he should opt for drama, action, a kiddie component, a competition format, foreign locations, a resident young love team and fantasy. Gotcha!