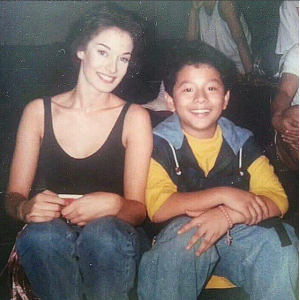 As ASAP Dancing Queen Dayanara Torres has made a comeback in the ABS-CBN Sunday noontime variety show, a former ASAP co-star, Marc Solis, reminisced the good old days with her.

On Instagram, Solis posted a photo of him and Torres inside the production set of ASAP. The actor also revealed that the Puerto Rican beauty queen has been his crush since childhood.

“Pic from our original #ASAP prods back then.. and after watching#ASAP22 prod number today, i had to repost this pic.. my childhood crush…up to now 😍❤ #EhemImStillSingle #ImAllgrownUpNow 😂😂😂#DayanaraTorres,” he said.

Pic from our original #ASAP prods back then.. and after watching #ASAP22 prod number today, i had to repost this pic.. my childhood crush…up to now 😍❤ #EhemImStillSingle #ImAllgrownUpNow 😂😂😂#DayanaraTorres

Since the news of her return to the Philippines to judge the 65th Miss Universe pageant here, the Miss Universe 1993 has reignited the fondness that Filipinos have developed for her during her five years’ stay here, where she built a career in the movie and TV industries. The Puerto Rican beauty is best know in local show biz as ASAP’s Dancing Queen.

Last Feb. 5, Torres reclaimed her title in a powerhouse performance on ASAP stage, dancing to some of the signature ’90s hits and reuniting with her former co-stars from her ’90s hit movie “Hataw Na” including Jolina Magdangal, Lindsay Custodio, Roselle Nava and Gary Valenciano, with whom she did a reunion performance of the movie’s theme song.

Torres is officially rejoining Manila Genesis Entertainment, but details have yet to be released regarding her future projects.