They dare to be different | Inquirer Entertainment

They dare to be different 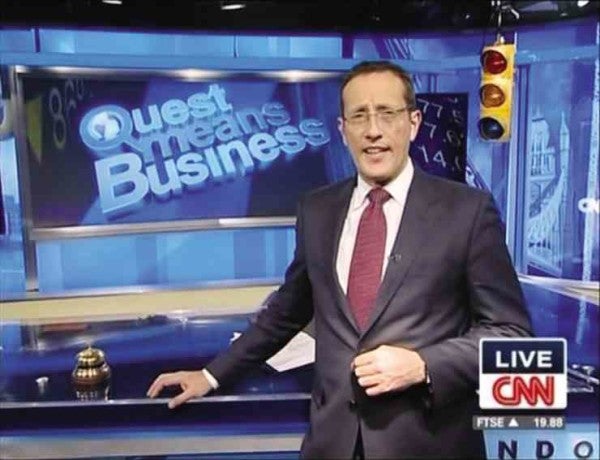 Most on-cam TV talents do their best to project an image of quiet confidence, competence, objectivity, reliability, intelligence and analytical ability.

Once in a while, however, a few droll deviations from that rigorous rule and template emerge, and they impact on viewers in a special way, precisely because they “dare” to be different.

Quest stands out from the TV gallery of good but bland lookers, because he isn’t exceptionally handsome or telegenic.

But he more than makes up for his “lack of visuals” with his competence, intelligence and experience—and, more to the pithy point, with his ebullience and eccentricity.

To CNN’s credit, it’s given Quest free rein to be himself, a crusty, cocky original in a field of clones.

His no-nonsense observations and pronouncements are couched in feisty language, with a suitably rough delivery, adding to the pungency and eccentricity of it all.

And yet, top business and travel bigwigs, not to mention Bill Gates and powerful government officials, readily agree to be interviewed by him.

They know that, when push comes to shove, Quest knows his business and is a complete professional.

Why don’t more TV talents try to emulate his unique success? Because, when it comes to “competent eccentricity,” you can’t credibly copy it—you’ve either got it or you don’t!

So, the bland types hide behind their “TV uniform” suits and “objective” faces, and leave Quest to do his best—or worst (which is best for him)!

Indeed, with Quest, what you see is what you get—even to the extent of his gay sexuality, which was “scandalously” revealed some years ago.

Impressively, instead of causing his career to self-destruct, CNN stood by him during his ordeal, and even gave him more responsibilities at the network.

Even more impressively, Quest’s viewers showed their support by continuing to watch his programs, to which he is “stupefiedly” grateful.

Quest’s crochety and curmudgeonly counterpart at the BBC is the similarly in-your-face Aaron Heslehurst of “World Business Report” and “BBC Breakfast.”

He’s reported on many global financial issues in his signature “gruff” manner, but viewers and business leaders pay attention to his comments, because he obviously knows his stuff, and the “rough and gruff” projection is just icing on the cake.

Quest and Heslehurst may be the exceptions who prove TV’s desultory “competent but bland” rule, but their very existence and prominence on the tube indicate that viewers want more of the same—as long as the idiosyncratic behavior is natural.

So, global and local TV networks and channels should be on the lookout for other talents who dare to be different while still being competent pros in communication, information and reportage.