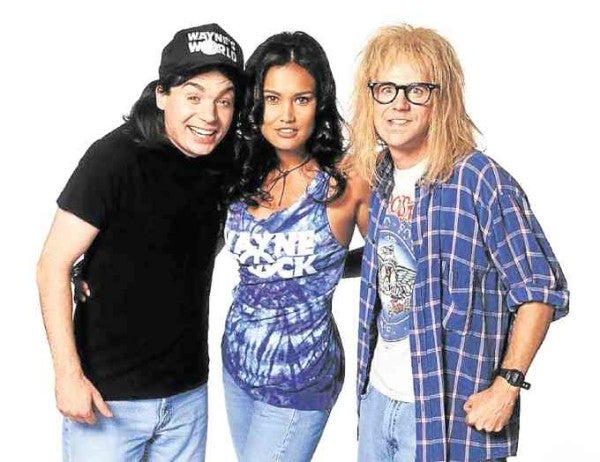 LOS ANGELES—It’s been 25 years since Tia Carrere appeared as Cassandra—red-hot in a short dress, long gloves and hoop earrings, and playing bass—in “Wayne’s World,” and made dudes exclaim, “Schwing!”

Today, the stunning Fil-Am actress, who turned 50 on Jan. 2, says that young guys still drop to their knees and tell her, “We’re not worthy!” That exclamatory declaration is one of the many catchphrases that are still quoted to this day from the pop-culture screen phenomenon.

Tia’s Cassandra, Mike Myers (Wayne), Dana Carvey (Garth), Rob Lowe (Benjamin) and their slacker pals will be back head-banging to Queen’s “Bohemian Rhapsody” on the big screen in time for the film’s 25th anniversary. Paramount Pictures’ cult comedy classic will return to select US theaters on Feb. 7 and 8 to celebrate this milestone.

The movie, directed by pioneering female director Penelope Spheeris, was originally released on Feb. 14, 1992. It sprung from a recurring sketch by Mike and Dana on “Saturday Night Live.”

It was the first major movie break of Tia, whose full real name is Althea Rae Janairo, a Honolulu native discovered in a Waikiki grocery store. Trying her luck in Los Angeles, she became a model and actress in a TV soap. She recalls that back then, it was something of a coup that an Asian-American actress like her landed the part in “Wayne’s World.”

The singer-actress went on to voice Nani in “Lilo & Stitch,” star in “Wayne’s World 2” and other films (including the recent “Showdown in Manila,” shot in the Philippines by actor-director Mark Dacascos), TV shows and win two Grammys for her Hawaiian music albums.

Still residing in LA, Tia is active in the Asian-American community and espouses for more projects for talents of color in Hollywood. She has a daughter, Bianca, 11, with photojournalist Simon Wakelin, from whom she is divorced.

What are your best memories of filming “Wayne’s World”? I loved getting to sing on set to the recordings I had performed in the studio. I even learned how to play the bass. Getting to sing and act in film is my greatest joy.

What are your memories about turning down “Baywatch” to be in “Wayne’s World”? “Baywatch” was looking for a marine biologist girlfriend for David Hasselhoff. I had gone in a couple of times to audition for “Baywatch” when I read “Wayne’s World,” and I was blown away.

I knew it was the part for me, so I had my agent drag his feet on the “Baywatch” deal to give me time to secure “Wayne’s World.” I could have lost both. It was a gamble.

I read that you modeled rocker chic Cassandra Wong after director Penelope Spheeris. Was she ahead of her time even then? I had seen her “The Decline of Western Civilization” documentary about the rock scene on the Sunset Strip and learned a lot about that scene. Penelope is the real deal. She’s a rocker, so I’d watch how she carries herself and everything. And for the singing, I was channeling Ann Wilson and Pat Benatar.

I must say, women are still very much underrepresented in the Directors Guild of America, with women directing only 6.4 percent of films today. So, 25 years ago, when “Wayne’s World” was made, Penelope was truly a groundbreaker who paved the way for other female directors.

You were quoted as saying that when you first came to Hollywood, it was very closed-minded. What was it like for an Asian-American actress trying to make it during those years? I’m from Hawaii, where everyone is mixed with different ethnicities, especially Asian. So, when I came to LA and people tried to put me in a box, like someone who needs to do accents, be subservient, wear long wigs—I had short hair at the time—it was strange to me. They hadn’t seen faces like mine onscreen. 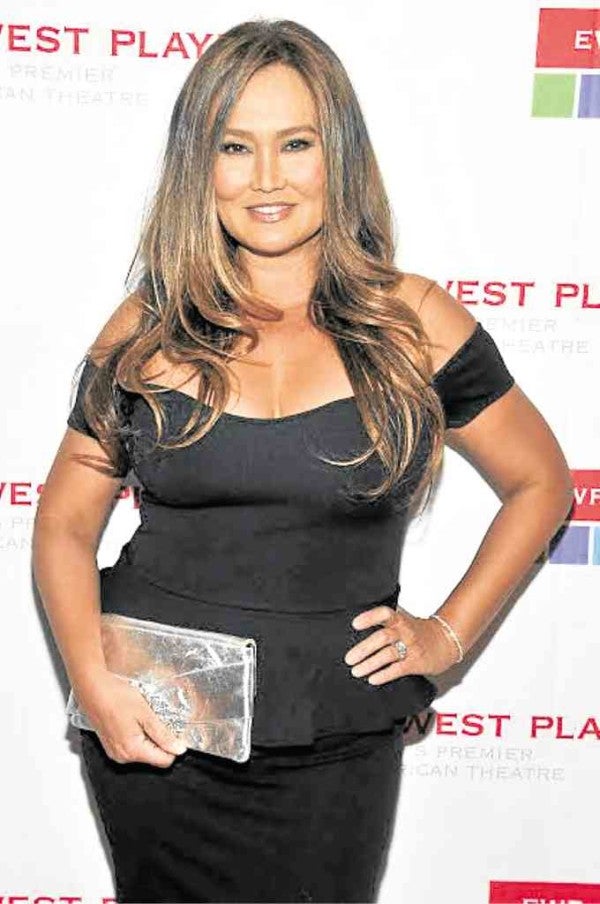 Today, you see many more girls and women who look like me.

How significant was it that you landed the Cassandra role in that era? Being Cassandra changed my life. Every opportunity that has come since is a result of being that character in that hugely successful film. Thank goodness Mike Myers wrote the part [to be] specifically Asian, or I would never have gotten a shot.

What are your funniest memories of filming with Mike and Dana? I loved doing the Stan Mikita (donut place in the movie) scenes. We were working until the wee hours of the morning when people got punch-drunk and wacky. Mike created a couple of characters from just playing around on set about 2 a.m. or 3 a.m.

How much fun did you have using your own voice on the songs you performed in the film and in its soundtrack? I have two platinum records on my wall because I had the good fortune of recording a couple songs on that soundtrack. That was a blast.

I’m still asked to sing “The Ballroom Blitz” today. As a matter of fact, I’ll be on a new Comedy Central show that comes out in March called “Comedy Jams.”

What were some of the strangest things that fans asked you to do? I just walked into a restaurant two nights ago, and two grown gentlemen, probably in their 50s or 60s, called out, “Cassandra! Tia! We love you!” It was hilarious.

And when I went to the House of Blues to see a performer recently, I turned around to find three young men in their 20s who dropped to their knees and chanted, “We’re not worthy! We’re not worthy!” Adorable.

Another fan had me sign his arm. He came back the next day to show me he had tattooed my name on his arm.

Have you tried head-banging to “Bohemian Rhapsody”? Who doesn’t when they hear that song?

Has your daughter Bianca seen “Wayne’s World”? What was her reaction, especially seeing you as Cassandra? Yes, I finally let her see it about a year ago. It’s hard for me to sit down and watch my work. I just puttered around in the kitchen and snuck peeks at her reactions. It was so cute seeing her laugh at the jokes.

You once said, “I had been gullible, naïve, soft, pliable. That’s why I got taken advantage of. To survive, you have to have a tough skin.” In this context, what other lessons have you learned that you’d like to share with young girls? I don’t know if I’m qualified to preach, but I’d say make sure you know yourself and what your goals are. There are different paths you can take. You want to make sure they’re the direction you want to follow, not just the path that happens to be in front you.

Have opportunities for people of color progressed since you first came to Hollywood? Absolutely. There are many more people of different ethnicities that you see on TV and film today. In particular, African-American actors and directors have made great strides in leading roles and directing successful films.

I do think we need to see more Asian-American actors and directors represented in big studio films, though.