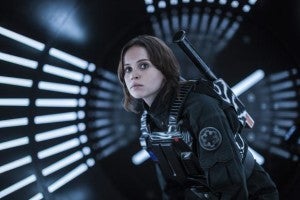 This file image released by Lucasfilm Ltd. shows Felicity Jones as Jyn Erso in a scene from, “Rogue One: A Star Wars Story.” The “Star Wars” spinoff “Rogue One” has led the box office for the third straight week, taking in an estimated $64.3 million over the four-day New Year’s weekend. (Photo by JONATHAN OLLEY/Lucasfilm Ltd. via AP)

LOS ANGELES — “Star Wars” is still dominating the movie universe, with “Rogue One: A Star Wars Story” topping the box office for the fourth straight week.

Studio estimates Sunday show the intergalactic adventure just edging out the NASA drama “Hidden Figures,” which expanded by more than 2,000 theaters Friday after opening in limited release. “Rogue One” brought in $21.97 million over the weekend. “Hidden Figures” collected $21.8 million.

The animated animal musical “Sing” comes in third, taking in another $19.5 million for a three-week haul of $213.3 million.

Final figures will be released Monday.