A Hollywood wary of Trump readies for 74th Golden Globes 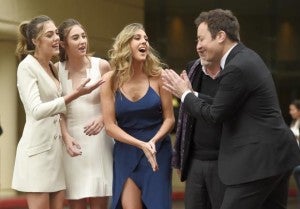 Awards are set to be handed out at the 74th annual Golden Globes, where speeches about Donald Trump and wins for the Los Angeles musical “La La Land” look like the night’s surest things.

Jimmy Fallon will emcee this year’s show, to be broadcast live from Beverly Hills, California, by NBC at 8 p.m. EST (9 a.m. Philippine time). It’s the first time in nearly a decade that someone other than Ricky Gervais or the duo of Tina Fey and Amy Poehler is hosting the Globes. But another transition is on the minds of many attendees.

Though usually a boisterous, boozy affair, the coming inauguration of Donald Trump is looming over this year’s Globes, which take place 12 days before the president-elect is to be sworn in. Throughout the usual self-congratulatory toasting of Hollywood’s awards season, many stars and filmmakers have evoked a foreboding sense of dread over a Trump presidency. Fallon, the popular “Tonight Show” host, isn’t known for his political humor, but he has promised a steady diet of Trump jokes.

Damien Chazelle’s “La La Land” comes in with a leading seven nods and a seemingly lock on the best picture award for a musical or comedy. Its stiffest Academy Awards competition, Barry Jenkins’ coming-of-age tale “Moonlight” and Kenneth Lonergan’s family drama “Manchester by the Sea,” will square off in the Globes’ dramatic categories, along with the heist thriller “Hell or High Water,” the Dev Patel-led “Lion” and Mel Gibson’s “Hacksaw Ridge.”

“The People v. O.J. Simpson” leads the television nominees with five nominations, including nods for stars Sarah Paulson, Courtney B. Vance, Sterling K. Brown and John Travolta. A number of recent shows are also in the mix, including “Atlanta,” “Westworld,” “The Night Of,” “This Is Us” and “Insecure.”

Last year’s ceremony, hosted by Gervais, drew 18.5 million viewers, down about 4 percent from the year before. Among the presenters on tap for Sunday night’s show are Leonardo DiCaprio, Emma Stone, Ben and Casey Affleck, Viola Davis, Amy Schumer, Sting and Matt Damon.

Surely many attendees will be thinking of those absent. After a year full of notable deaths, the back-to-back passing over the holidays of Debbie Reynolds and her daughter Carrie Fisher was felt acutely in a Hollywood that revered both. Reynolds and Fisher were laid to rest Friday in Los Angeles.

One other thing is assured: Meryl Streep will go home with an award. Though always a good bet for hardware, Streep is this year’s recipient of the Cecil B. DeMille Award for career achievement. She’s also nominated for her performance in “Florence Foster Jenkins,” her 30th Globe nod. –Jake Coyle