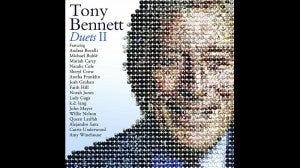 Style is good when it impresses, great when it inspires, moving when it weaves deftly into other styles for a perfect fit.

Natalie Cole said it even better when describing the singing of Tony Bennett, with whom she collaborated on one track (“Watch What Happens”) for “Duets II.”

For “Duets II,” the venerable Mr. Bennett, 82, winged it every step of the way with 17 artists of disparate styles.

All but two of these endeavors work wonderfully. Lady Gaga is a joy on “The Lady Is A Tramp” and Norah Jones is subtly masterful on “Speak Low.” Queen Latifah on “Who Can I Turn To,” Mariah Carey on “When Do The Bells Ring For Me,” Sheryl Crow on “The Man I Love” and Faith Hill on “The Way You Look Tonight” get equal points in our book for cool harmonizing.

Curiously, we can’t say as much for Aretha Franklin on “How Do You Keep The Music Playing” or Andrea Bocelli on “Stranger In Paradise.” And we so looked forward to hearing these tracks! The two legendary vocalists can’t quite keep it down, so what start as promising duets end up unwieldy, even screechy. Which doesn’t happen to Josh Groban on “This Is All I Ask” or Carrie Underwood on “It Had To Be You,” or Alejandro Sanz on “Yesterday I Heard The Rain.” Meaning, it’s not a question of “too different” genres.

Amy Winehouse on “Body And Soul” is gruff and compelling—a memorable last recording. In absolute contrast, k.d. lang on “Blue Velvet” is smooth and seductive. Michael Bublé on “Don’t Get Around Much Anymore” and Willie Nelson on “On The Sunny Side Of The Street” are definitely fun buddies for Bennett. John Mayer is clearly awed to be singing with Mr. Easy and marvels at Bennett’s higher registers in the accompanying 28-minute DVD, “Duets II— The Making Of The Album.”

Oh, yes, about that… everyone, except Winehouse, recite variations of Ms Cole’s “easy as butter” line to describe their experience with Bennett.

As much as any of Bennett’s Christmas albums, this one would be a pleasure to receive for anyone who wish to be reminded that good, old-fashioned “organic” (Underwood’s word— tracks were recorded as performed live) singing is the cozy way to go.

‘The voice of an angel’

David Foster can’t say that enough. This was how he introduced 11-year-old Jackie Evancho in a concert in Mandalay Bay and again in this concert on DVD, “Dream With Me In Concert” (staged at the John and Mable Ringling Musem of Art in Sarasota, Florida).

Is this girl the reason that Foster didn’t seem to mind parting ways with our Charice? This little American soprano is adorable. Better yet, she delivers the goods. In this DVD, she tackles stuff that has come to be expected of her and then some more: “Nessun Dorma,” “O Mio Babbino Caro,” “The Lord’s Prayer,” “When You Wish Upon A Star.”  Her video interaction with Barbra Streisand on “Somewhere” is a thrill.

Evancho has a Christmas CD out, too, “O Holy Night.” a four-song holiday treat plus a bonus DVD of her performances on “America’s Got Talent” (she was runner up in 2009).

Speak of pleasant timing: As Metro Manila once more experiences the memorable “The Sound of Music” onstage at Resorts World Manila, here are two CDs just out: One is the 45th anniversary edition of the Rodgers & Hammerstein musical soundtrack, featuring a brand-new recording of “My Favorite Things,” by Lea Michele of “Glee.” The rest of the package, of course, is the full repertoire from the movie starring Julie Andrews.

The second CD features the original Broadway cast led by Mary Martin. Hear Maria trill in a less cinematic timbre; it could just be your cup of tea— “a drink with jam and bread,” anyway it’s sung.