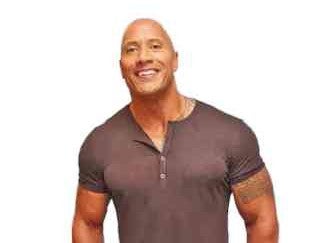 Los Angeles—There’s never a better time to be Dwayne Johnson. Not only is he the highest-paid actor in the world, People magazine just declared him the “sexiest man alive.”

Or make that the sexiest demigod alive.

The wrestler-turned-actor voices Maui, a demigod, in Ron Clements and John Musker’s Disney animated movie, “Moana.” And get this—as if there weren’t enough good news already about Dwayne—he can carry a tune. The 44-year-old sings “You’re Welcome,” a tune penned by no less than “Hamilton” composer Lin-Manuel Miranda with Opetaia Foa’i and Mark Mancina.

Sporting a deep tan, Dwayne wore a short-sleeved black shirt that exposed his biceps, which seem to have grown even bigger from the last time we saw him, and jeans.

Does this film make it official—you are now a god?

Demi(god). So there’s God, then there’s demigod (laughs). We had so much fun with this. When the project came to me from Disney, at first I didn’t know that there was going to be the element of music in it, as well. So there were a lot of great elements that made it easy to say yes to it. It was very exciting, because it was a great opportunity for me to exercise certain muscles that I had not used. Singing is not my forte.

But you did a good job at singing “You’re Welcome.”

You’re welcome (laughs). Thank you very much. I had a lot of help from Lin-Manuel and our filmmakers.

Do you sing often in real life?

Yes, I grew up in a singing family. I was also always playing musical instruments—ukuleles, guitars and things like that.  But not to this degree (in the movie). I didn’t start off as a singer. I am an actor. But I was excited about singing. The bar is set very high in a Disney movie when you are asked to sing (laughs). So the pressure was on.

I felt confident when I finally got in the studio for the song, knowing that I had Lin, who came down. He conducted me in the session. I sang in the past—in a talk show. I sang just for fun. To Lin’s credit, he did his research and created this song in a nice, comfortable range for me to sing.

He told me that he created places in the song where it would push and challenge me in terms of my vocals. Lin had two days off from his “Hamilton” play in New York. He flew down (to Los Angeles), and we did the song together. But I didn’t know until we were done how complicated Lin’s writing actually is.

In terms of the music that he writes—intonation and where it goes—I didn’t know that until it was actually explained to me. I was very happy that the song came out very well, and it sounded pretty good.

Did you ever think there would be a time when you’d be the highest-paid actor in the world?

Never. I did not. Nor was it my goal. When I was 14, I was evicted. So my motivation to make something of myself came out of that. I didn’t want to be evicted again.

We lived in a little efficiency (studio apartment) in Hawaii. We were kicked out of that and then forced to leave the island. So, I never thought that I would be sitting here, and you and I would be discussing me being highest paid or anything like that. I am very grateful.

I am happy, because while the money is great and I’m not complaining about it, the motivation comes from trying to create and develop good content for people in a variety of different genres, whether it’s in animation, action or comedy.

In the film, your character’s tattoos come to life. Would you also like to see any of your own tattoos move?

I would love that, yes, especially if my conscience were telling me, “It’s better if you don’t do that thing you’re thinking about doing.”

Finish this sentence: Dwayne Johnson is…