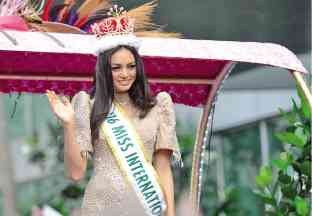 The sight of 2016 Miss International Kylie Verzosa in an elaborate “terno,” with a pearl-encrusted crown on her head, atop a flower-decked float during her victory parade last Friday seemed too good to be true for her parents.

“During high school, they (a lot of people) wanted her to join [a beauty pageant]. They just put her in, and she didn’t take it seriously, kasi talagang ayaw niya. It wasn’t part of her plans,” he added.

Her mother, Racquel, agreed: “She was never interested in pageants in the beginning, so we were surprised when she said she wanted to join Binibining Pilipinas.”

Her mother recalled: “At a certain age, kids would just like to be in sneakers, in rubber shoes. Only when Kylie started modeling when she was in college did she start dressing up.”

But when the fateful day came in 2015, her parents and their entire family got behind her decision to enlist for the Binibining Pilipinas pageant.

The Verzosa patriarch surmised that the decision was a “natural progression” from modeling.

“She started modeling and she always said, ‘Dad, I always believe I can do something more. I have a voice. I have an advocacy. I want to share it.’ In modeling, you don’t have a platform to share what you have. And the natural place to go next was a pageant,” Ari explained.

Kylie has been vocal about promoting mental health awareness in the country. This was especially true after Kylie’s first Binibining Pilipinas stint in 2015, where she ended up “only” as a semifinalist.

Kylie sought the advice of her family before attempting again. Ari said he told his daughter to join if she thought she could do better.

But her youngest brother, Yuri, was more upfront. “You should join one more time. If you don’t go anywhere, that’s it,” the 11-year-old boy said.

So the eldest of the Verzosa children did just that. She made a triumphant comeback by bagging the Bb. Pilipinas-International title.

Last month, she bested 69 other aspirants in the global tilt in Japan to become the sixth Filipino to win the Miss International title.

“It has made her a better person in terms of confidence, dealing with people from all walks of life,” Raquel shared with the Inquirer.

Ari said that for Kylie, the idea of being an international beauty queen is still sinking in.

“We received a text message from Kylie the day before her arrival from Japan, asking us to pick her up because she said ‘Baka ako lang nandoon,’” he said. “I told her, ‘Somebody’s gonna be there.’”