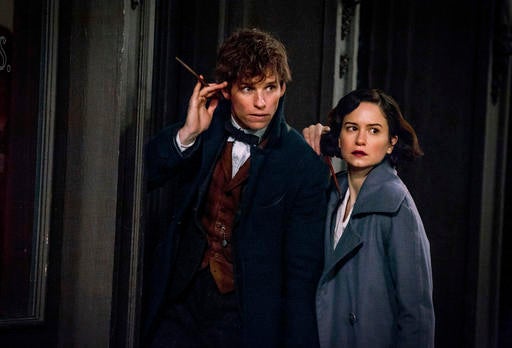 This image released by Warner Bros. Entertainment shows Eddie Redmayne, left, and Katherine Waterston in a scene from “Fantastic Beasts and Where to Find Them.” (Jaap Buitendijk/Warner Bros. via AP)

LOS ANGELES—Harry Potter spin-off “Fantastic Beasts and Where to Find Them” debuted atop the North American box office, industry data showed Monday, taking a satisfactory but far from spellbinding $74.4 million.

Based on a 2001 book by “Potter” novelist J.K. Rowling, the Warner Bros. film — starring Eddie Redmayne as a wizard in 1920s New York — had to rely on fans of the original franchise to bump up its numbers.

Just a fifth of the opening weekend audience was under 18, while more than half were aged over 35, according to industry monitor Box Office Mojo.

Analyst Brad Brevit concluded in a blog on the website that “previous ‘Harry Potter’ fans showed up, but the new generation wasn’t quite as inspired” by the $180 million spinoff.

READ: Is ‘Fantastic Beasts’ Still Worth the Magic?

It was the lowest opening for any film in Rowling’s “Wizarding World” series although industry watchers expect it to go on to make an acceptable $280 million.

It took first place away from Marvel’s “Doctor Strange”, which dropped to second in its third week in theaters as it posted another $17.8 million, for a total of $181.6 million.

The movie, which stars Benedict Cumberbatch as neurosurgeon Stephen Strange — whose life changes forever after a horrific car accident — is the 14th film in Disney’s “Marvel Cinematic Universe.”

Based on the classic plastic dolls known for their multi-colored hair, “Trolls,” featuring the voices of Justin Timberlake and Anna Kendrick, has reaped a total of $116.2 million in three weeks.

Rounding out the top 10 films were:

Read Next
For Angelica, her being ‘weird’ would make her a good wife
EDITORS' PICK
What to watch out for when selecting a video surveillance solution
House energy committee chair Arroyo bats for cheap electricity
DOH says COVID-19 cases plateauing, but public shouldn’t be ‘complacent’
23,000 cops to be deployed nationwide for school reopening
Look Through: The fate of impounded stray dogs
Unleash the photographer in you this World Photography Day with vivo smartphones
MOST READ
Sharon Cuneta asks for prayers for friend in ICU who suffered silent stroke
Korina Sanchez reunites with former ABS-CBN co-anchors Julius Babao, Cheryl Cosim
Light therapy could be the answer to your sleep problems
Solons file resolutions seeking probe on ABS-CBN, TV5 merger
Don't miss out on the latest news and information.