Director of PH’s Oscar bet talks about EJKs, Agot and the President

Although he is no newcomer when it comes to conducting master classes, Cannes-winning director Brillante Ma Mendoza marks a first with his latest speaking engagement in Paris, France, this month.

“Abroad, I usually give master classes to foreign film students,” he relates. “This time, however, I’ll be talking in front of French-Filipinos who were either born or raised in Europe.”

Mendoza teamed up with Caffe Veloce, Stephane Triffault and Vladelyte Valdez-Ramos, for this coming event, which coincides with the P-Noise Film Festival, to be held at the Club de l’Etoile, from Nov. 18 to 20.

P-Noise aims to showcase Filipino art and culture, Triffault explains. “It’s a good way for French-Filipino youths to get reintroduced to their parents’ heritage.”

“It’s interesting that the Filipino community is involved,” Mendoza points out. “Young people, who have lost touch with their Filipino roots, will have the chance to watch films that depict the real situation of the country.”

After film, Caffe Veloce is also planning events that will highlight Filipino food and fashion next year.

Mendoza acknowledges that conducting master classes is personally rewarding, as well. “I also learn a lot from the audience and the filmmaking process,” he admits. “In researching a script, I interview several people. I discover many new things while talking to different people.”

In turn, he shares these anecdotes in his lectures and the students likewise contribute fresh insights during their discussions.

The P-Noise master class will serve as preview for the theatrical run of “Ma’ Rosa,” which will open in French cinemas on Nov. 30.

“Pyramid is handling the distribution in France,” Mendoza says.

“We have a reliable network of independent cinemas in France,” Triffault relates.

After France, he will travel to the United States, to attend the “Ma’ Rosa” lunch screening at the Academy of Motion Pictures Arts and Sciences (Ampas) on Nov. 30. He reports that the Film Development Council of the Philippines (FDCP) has pledged P1 million for the film’s Oscar campaign. 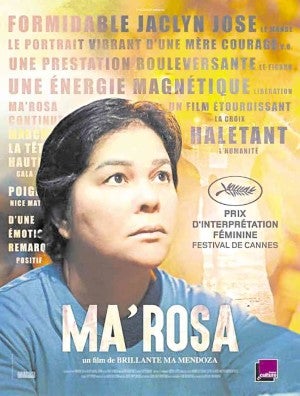 In public fora, it is inevitable that Mendoza will be asked about President Duterte and other controversial issues. (He was commissioned to direct the President’s first State of the Nation Address.)

“When people ask me about extrajudicial killings (EJKs), for example, I can only share what I see on television,” he remarks. “I don’t know the real score. I’m not a government official.”

He is a filmmaker, he asserts. “I have been tackling issues like illegal drugs, corruption and injustice in my films from the start. So, when they ask me if I have plans to make a film on EJKs, I tell them I already did in 2009, with ‘Kinatay.’ I don’t want to be accused of riding on the publicity.”

Case in point: He shot “Ma’ Rosa,” which focuses on the drug trade, long before the President won the election.

So, is the filmmaker a prophet, too?

“I don’t make predictions. All these things are happening around us; you just have to open your eyes to reality. You need to be observant,” he quips.

But will he direct singer-actress Agot Isidro, who made waves after criticizing the President on Facebook?

“I have no opinion on that issue,” he exclaims, “but I am more than willing to work with anyone. It doesn’t matter to me if you’re from the mainstream or indie scene—as long as it’s the right role and project for you, there should be no problem.”