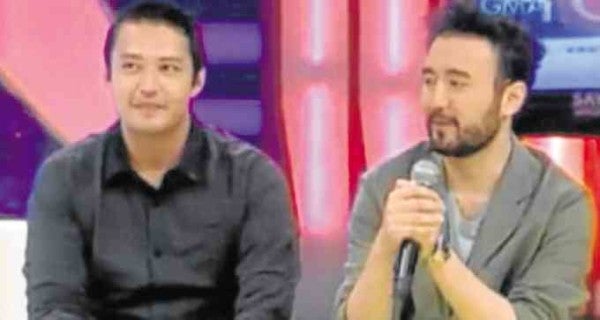 “I think there was an injustice in what happened to him (jailed actor Mark Anthony Fernandez).”

Actor Rap Fernandez said this last Wednesday when asked about his thoughts on the incarceration of his half-brother Mark for alleged possession of a kilo of dried marijuana.

Although not allowed to talk about Mark’s case, Rap could not help express his thoughts on the issue as he discussed his views on the legalization of medical marijuana.

“On a larger scale, I think that failing to pass the law to legalize marijuana is an injustice to the sick people who need it. It is meant to heal,” he stressed.

Mark had claimed he was using marijuana only for “medicinal purposes.”

“It has already been legalized in California some 20 years  ago. It’s time we become open to that idea here,” Rap said during the launching of the 2016 Cinema One Originals, an annual film festival where his movie, “Every Room is a Planet” is one of the finalists. (The festival runs from Nov. 14 to 22 in selected Metro Manila theaters.)

“Even President Duterte, in two instances, mentioned that he was in favor of it,” Rap pointed out.

The President was quoted to have said he does not oppose the legalization of marijuana, but is against its use for recreational purposes.

House Bill No. 4477, which was filed in May 2014 by Isabela Rep. Rodolfo Albano III, aims to legalize the “compassionate use of marijuana.”

He also agreed with his Tito Robin’s (Padilla) opinion about medical marijuana, as expressed in the latter’s comment to his Facebook post showing the two brothers together in a photo.

Robin’s comment: “It will be a long sacrifice for your brother, but [the legalization of] medical marijuana will be his contribution to the future.”

Mark Anthony is the son of actress Alma Moreno and the late Rudy Fernandez—Robin’s first cousin. Rap is the son of Rudy and actress Lorna Tolentino.

“Legalizing marijuana use will actually help in the government’s effort to curb illegal drugs,” Rap pointed out.

He also noted the conflicting statements issued by the police and his brother, as follows:

“There are so many stories coming out, including the talk that the kilo of marijuana has been planted. Mark admitted to having only an ounce, and that he bought it; that it could not have been a kilo, because that would be too heavy, since that included stems and branches.

“If Mark’s claims were true, then it’s a tragedy to get lifetime imprisonment for having a certain amount of grass. It’s not even a kilo of ‘shabu.’”

Rap said he recently paid Mark a visit at the Pampanga provincial jail. He recalled: “He was alone in the initial detention cell when I saw him. He got really disturbed when he was transferred the second time, because it was a cell with 100 other people. He is in a better jail cell now, because he shares it with only three other people.”

He continued: “I sent him food. I told him to share it with the others.”

Rap then appealed to people for compassion and kindness for his half brother. “Let’s do away with posting nasty comments [in social media]. Let’s not be mean. He’s a good person. I know him; he’s my brother. Don’t throw stones at him. Nobody’s perfect.”