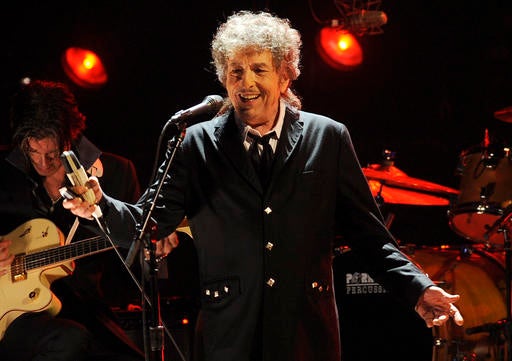 In this Jan. 12, 2012, file photo, Bob Dylan performs in Los Angeles. Dylan was named the winner of the 2016 Nobel Prize in literature Thursday, Oct. 13, 2016, in a stunning announcement that for the first time bestowed the prestigious award to someone primarily seen as a musician. AP FILE PHOTO

If the phrase “voice of a generation” were trademarked, it may well belong to Bob Dylan.

But the singer and poet, whose surprise win of the Nobel Prize for Literature only cements his iconic status in 1960s counterculture, has been an uneasy spokesman.

Best known as a folk singer, the 75-year-old Dylan cruised past prominent US novelists of his age range such as Don DeLillo and Philip Roth — to say nothing of late, quintessentially 1960s writers such as Jack Kerouac — to be the first American to win literature’s most prestigious prize in more than two decades.

Dylan became synonymous with the 1960s generation in no small part due to his anthem “The Times They Are A-Changin’.”

Foreshadowing the decade’s burgeoning youth culture and political turbulence, Dylan wrote the song in 1963 just after the landmark March on Washington catalyzed the civil rights movement and he offered an early live performance of it after John F. Kennedy’s assassination.

Appearing in 1964 as the title track of an album by the same name, “The Times They Are A-Changin'” is among Dylan’s most accessible works at just three minutes with a memorable melody, a contrast to some of his more adventurous, abstract later work.

The young Dylan in the song directly addresses members of Congress — “Please heed the call / Don’t stand in the doorway” — as well as parents, singing, “Your sons and your daughters are beyond your command.”

Dylan has gone on to address civil rights and has conjured up plenty of characters both dark and inspirational from the American past.

Yet he has steadfastly brushed off his label as his generation’s voice, saying — with what appears to be sincerity rather than false humility —  that he simply wants to play music.

Refusing to be classified

His tension with the expectations around him grew so intense that at an infamous 1966 news conference in Paris, shortly after he stunned folk purists by going electric, Dylan appeared with a puppet who pretended to listen to each question and, when asked if he had a deeper message to his work, Dylan answered simply, “No.”

“My stuff were songs, you know? They weren’t sermons,” Dylan said in a rare 2004 interview with the CBS television show “60 Minutes.”

“If you examine the songs, I don’t believe you’re going to find anything in there that says that I’m a spokesman for anybody or anything really,” he said.

In part of his “Chronicles” memoir, Dylan was more poetic when he wrote of those who idolized him: “What kind of alchemy, I wondered, could create a perfume that would make reaction to a person lukewarm, indifferent and apathetic?”

On his recent tours, Dylan has proven to be the ultimate crowd un-pleaser — he rarely says a word to the audience, cares little if they can see him on stage and, most notoriously, has little interest in playing hits.

And unlike many of his folk contemporaries, such as his former partner Joan Baez, Dylan has never affiliated himself directly with political movements.

At the 1985 Live Aid concert for Ethiopian famine relief, Dylan quipped that some of the money should go to US farmers struggling to pay their mortgages — a comment that was jarringly off-message for the day, but instigated the Farm Aid series of relief concerts led by Willie Nelson.

Political in his own way

Jeff Taylor, a professor of political science at Dordt College in Iowa who has studied Dylan’s politics, said that the rock icon may most accurately be described as an anarchist — impassioned by social justice but with a cynical streak.

“I think he’s highly political but it depends on how you define politics. He’s someone who has always had a strong social conscience,” Taylor said.

“What’s at the heart of politics is power and since he views concentrated power with suspicion, if not hostility, he’s always in some ways been opposed to what the current power structure is,” Taylor said.

Among previous Nobel laureates, Taylor said that one parallel with Dylan could be Francois Mauriac, the French author who won in 1952. Like Dylan, Mauriac wrote with deep religious undertones but primarily was tackling human injustice.

Dylan “never wanted to be a political or social leader, but the irony is that he did become that because he voiced so many things people were feeling,” Taylor said.

Yet Dylan late in his career may have finally seen himself as a voice of his generation in one sense.

He has been unabashed of his advancing age and in 2015 gave his first interview in years to the magazine of AARP, the US association of retirees and seniors.

Dylan, who approached the magazine rather than vice versa, said that when getting older, “you leave certain things to the young.”

“Don’t try to act like you’re young. You could really hurt yourself,” he said.

It was a sentiment, this time from a rock elder, not too far from “The Times They Are A Changin’.”/rga