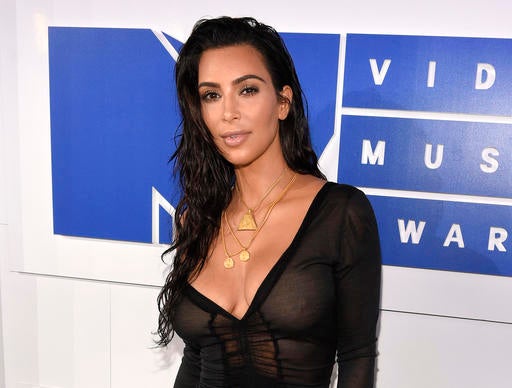 In this Aug. 28, 2016 file photo, Kim Kardashian West arrives at the MTV Video Music Awards in New York. Kardashian West is suing online media outlet, MediaTakeOut.com, saying she was wrongly portrayed as a liar and thief after she was attacked in Paris. Police say armed robbers forced their way into a private residence where Kardashian West was staying on Oct. 3, tied her up and stole $10 million worth of jewelry. (Photo by Chris Pizzello/Invision/AP, File)

LOS ANGELES—Kim Kardashian filed suit Tuesday against Mediatakeout.com for alleging the reality TV star faked having her expensive jewelry robbed in Paris to cheat her insurers out of millions.

In a suit filed in New York, the 35-year-old star said that “after having been the victim of a horrific and traumatic armed robbery in France, Kim Kardashian returned to the United States only to again be victimized, but this time by an online gossip tabloid that published a series of articles in early October 2016 referring to her a liar and thief.”

The articles “claimed, without any factual support whatsoever, that Kardashian faked the robbery, lied about the violent assault, and then filed a fraudulent claim with her insurance company to bilk her carrier out of millions of dollars,” the lawsuit said.

“Defendants’ malicious publication of the Articles, which paint the victim of a serious crime as a criminal herself, is libelous per se.”

The multimillionaire US reality TV star, who was in the French capital for Paris Fashion Week, was robbed on October 3 by five men posing as police officers.

Kardashian was tied up and locked in the bathroom while the robbers helped themselves to a ring worth around four million euros ($4.5 million) and a case of jewelry with a value of five million euros ($5.6 million).

Two mobile phones were also stolen during the holdup in the chic Madeleine district of Paris, near the city’s main department stores.

The mother of two and wife of rap superstar Kanye West flew home to the US after being questioned by police over the incident, which a spokeswoman said had left her “badly shaken.”

Kardashian has been a fixture of US celebrity news for more than a decade, known mainly for the TV show “Keeping Up With The Kardashians” and a leaked sex tape.