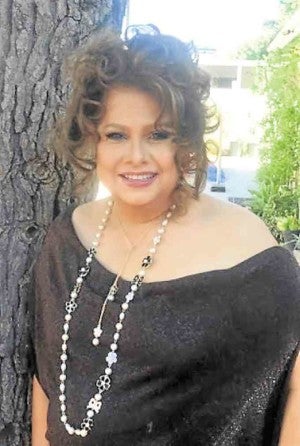 LOS ANGELES—Djhoanna Garcia, who now goes by the name Giji Kocher, steps out of her comfort zone in her first major Los Angeles concert. The former first lady of Caloocan, noted for belting ballads, especially those of Shirley Bassey, will perform songs like Led Zeppelin’s “Stairway to Heaven” and will even scat.

“This is the first time that I’m performing way out of my comfort zone,” said the singer-actress about her show, “Giji,” on  Oct. 2, 6 p.m. at Wilshire Country Club in Los Angeles.

Based in the US since 2001, Giji makes it a point to find time for her passion—singing—while also running a home-care business.

I didn’t get to watch Giji in shows in Manila, but in recent years, I saw her in several LA shows. I always came away impressed by her depth and range. Now, it looks like the Sunday concert will finally showcase Giji’s growth and maturity as a musical artist in a major way.

In an unusual move that reflects his belief in Giji’s talents, Edwin Raquel, a Fil-Am community arts and philanthropy leader, texted the performer and offered to produce the show for her.

The CEO and president of a company, who owns the former mansion of silent movie sweetheart Mary Pickford that’s been the location of movies from “The Artist,” “Rocky IV” to “Taken,” tapped Geo Sargent as director and Roy Venturina as musical director, with acclaimed jazz singer Mon David as the sole guest.

“The concert will showcase the talents of both Giji and Roy to an intimate group of friends, business associates and music fans who appreciate the arts in general,” Edwin said. “It is for this reason that the show isn’t advertised widely; it is marketed by word-of-mouth.

“Both Giji and Mon have generously offered their talent gratis in some of these performance events. Without meaning to sound patronizing or haughty, I thought I’d reward them with a concert where they can make their talent fee! Also, I started to feel that ‘producing bug’ again after watching a friend of my daughter give a private concert to friends and family which turned out to be a lovely event.

“On a personal level, I was challenged by the idea of a revue for Giji and Mon’s voices, using songs that the audience will hopefully relate to, and an arc that isn’t quite musical theater or Broadway, but one that is scripted, yet fun. So, there is a little bit of choreography, acting and staging that will surprise our guests.

“I had some very specific songs I wanted Giji to sing—some personal to me, some I thought she would be able to ‘kill,’ just from knowing her forte. As it turned out, we were able to weave a story arc around the songs after we interviewed her about her life, which she wasn’t ashamed of or shy to share.

Giji emphasized that while she will tackle songs that will surprise even her closest friends, she will “still get to sing the songs that have been identified with me. Edwin, Geo and I, and even Mon himself and our musical director, maestro Roy Venturina, collaborated in choosing the repertoire. It’s like getting out of the box. We’ve been holding intense rehearsals. I even took voice lessons again with Louie Reyes.”

One of her new material is Jenn Renee Cruz’s version of “Is You is or is You Ain’t my Baby.” “With matching scatting pa ’yan,” quipped Giji, who is also noted for her humor and gregariousness. Her “Stairway to Heaven” is the version that Heart performed at Kennedy Center Honors which moved Led Zep lead singer Robert Plant to tears.

“Act Two is about Giji’s colorful life,” Edwin said. “I added a spiritual song. ‘Light of a Million Mornings’ because, as Giji says, ‘I have been saved by the Lord.’”

Giji and Macario “Boy” Asistio Jr., who was Caloocan’s mayor from 1980 to 1995, were together for 17 years until their split in 1990. They have two daughters and four grandchildren. “We have remained the best of friends,” Giji said of Boy.

Giji is married to Vincent Kocher, whom she met in the Philippines through Katrina Ponce-Enrile. They were married in 2001 in the same Las Vegas wedding chapel where Elvis and Priscilla Presley got hitched.

Geo shared, “Using Giji’s talent as a performer and life as inspiration, I wrote a script that touches on these that will hopefully come through, but not in a blatant way. What excites me the most is that we have given Giji a challenge to step out of her comfort zone.”

“Direk Geo, as I fondly call him, is a perfectionist and a very detail-oriented director. He is extremely patient and cool and will go the extra mile to support his artist,” Giji said.

“I am blessed to have Edwin as my producer and dear friend. He believes in me and encourages me to go for it.

“I personally chose Mon as my guest because, first of all, he is my idol. In spite of his numerous awards as a jazz artist, he remains a true gentleman. I love performing with Mon because we complement each other.”