What goes around, comes around | Inquirer Entertainment

What goes around, comes around 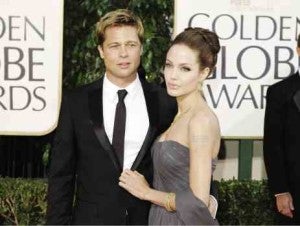 LIKE many film buffs, we’re saddened by the breakup just last week of “Mr. and Mrs. Hollywood”—Angelina Jolie and Brad Pitt—after 12 years of being a couple.

Spouses break up all the time in show business, but “Brangelina’s” unique relationship appeared to be stronger, richer and deeper than usual—so, the viewing and ogling public’s feelings of “empathetic estrangement” are exceptionally intense.

What went, oh, so wrong? At first blush, the couple seemed to have it all. Not only were they breathtakingly goodlooking, but they were good actors whose hearts were in the right place—beating not only for each other, but also for hurting, dispossessed and disadvantaged people everywhere.

This was eloquently shown by the many humanitarian advocacies and initiatives they would separately and jointly found and promote.

That’s why, although Pitt was married at the time to Jennifer Aniston, fans generally didn’t paint the scarlet letter on Jolie’s heaving chest, as the couple went from “Mr. and Mrs. Smith” on the silver screen to “Mr. and Mrs. Hollywood” in real life.

Indeed, how could fans hate and vilify a star who was obviously so well-intentioned—except for the fact that she had upped and stolen somebody else’s spouse?

Well, it looks like what goes around really comes around, as “Mr. and Mrs. Hollywood” are now themselves headed for divorce court! Again, what went wrong?

Jolie has reportedly cited rankling issues like alcohol, marijuana and anger management, which apparently became such deal-breakers that she opted to end it all, for their six children’s peace of mind.

But, peace in an abridged union is a contradiction in terms, so where’s the surcease there?

Adding to the continuing lack of peace of mind are other unresolved side issues, which have yet to be officially verified and acknowledged—like, the possibility of the involvement of a third party in the stellar split-up.

That rumor’s specific suspect is Marion Cotillard, Pitt’s co-star in his latest film, “Allied.” Sources trace its alleged veracity to on-set observers’ reports of “crazy chemistry” in the star’s love scenes while shooting the film.

Quite ironically, this reminds some people, particularly Aniston’s still aggrieved fans, that Jolie similarly “stole” Pitt from his first wife while filming their costarring vehicle, “Mr. and Mrs. Smith!”

It’s taken 12 long years for this particular karmic harvest to have come full circle—but, by their psychic reckoning, it’s been worth the wait!

Uh, not so fast. For her part, Cotillard has vehemently issued an outright denial, insisting that all that “crazy chemistry” was completely professional, merci bien. The truth is, she’s absolutely, ecstatically happy with her significant other, with whom she has a 5-year-old son.

So, nasty and mean-minded fans who are painting her as the scarlet woman in this rumored retread are barking up the wrong tree, and Cotillard absolutely refuses to end up as collateral damage as the Pitts head for splitsville.