What a night, indeed 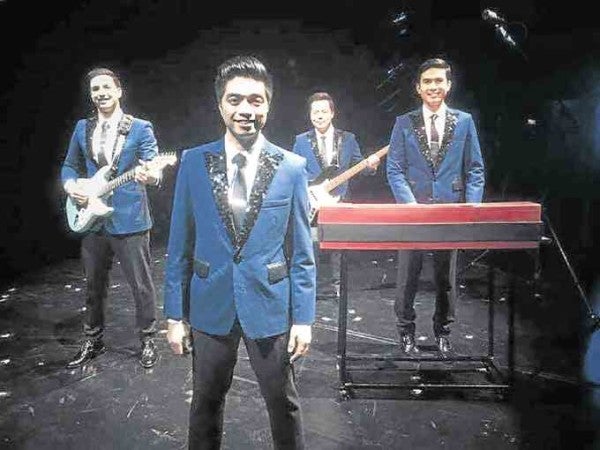 With heaps of anticipation and despite the four-and-a-half-hour-long “carmageddon,” my daughter and I headed to Meralco Theater to see the opening night of the latest offering from Atlantis Theatrical, “Jersey Boys.” The Tony-winning musical has arrived in Manila, and I was very excited to see it.

I had previously seen “Jersey Boys” twice. The first time was in Las Vegas where one former leading man, Peter Saide, was playing Bob Gaudio.

The second time was in Singapore, along with my “God of Carnage” costars Menchu Lauchengco-Yulo, Art Acuña and Adrian Pang, when a touring production played at Marina Bay Sands. So, of course I was curious to see how this production would stack up.

First off, this isn’t a carbon copy of the official Broadway and touring productions. There are new sets (wonderfully designed by Faust Peneyra), new lighting by designer Driscoll Otto (assisted by Adam Honoré) and new staging by director Bobby Garcia.

However, the sound that everyone produces is of course by the book (with on-point music direction by Ceejay Javier), exactly the signature sound we expect to hear.

Casting the gentlemen that will be singing those incredible songs, as well as telling the story, needed to be strong actors and singers, Bobby found them in Nyoy Volante (Frankie Valli), Christian Bautista (Bob Gaudio), Nino Alejandro (Nick Massi) and Markki Stroem (Tommy de Vito).

This is probably the role Nyoy was meant to play, and he does it excellently. Without a snag in that Valli falsetto, he delivers a well-rounded, emotional performance without imitation or caricature.

Christian is in great voice, always long, lanky and handsome, but he has definitely grown—and grown up—since his Tony in “West Side Story.”

Nino is better-known as a rock singer with a strong tenor voice, but he switches gears here by singing bass. He also has that Jersey accent down.

However, I must reserve my biggest applause for Markki. He has always been great (I’ve watched him in “Next to Normal” and “Carrie,” both for Atlantis), but his Tommy transformed him. He was no longer a boy, but a man, cast in a challenging, commanding role. Thankfully, he was up for it, and is truly a revelation.

All the supporting roles were well-filled, too: Nelsito Gomez as Joe Pesci (yeah, that Joe Pesci) was incredibly funny; Mikkie Bradshaw-Volante as Frankie’s wife, Mary Delgado, was tough as nails one minute, and vulnerable the next; Yanah Laurel as Lorraine, the journalist Frankie falls in love with, is poised, smart and beautiful; Gianina Ocampo as Francine Valli broke my heart; and Jamie Wilson as Gyp de Carlo is such a charming mob man.

It pays to know that all of them, plus members of the talented ensemble, play a myriad of roles—and play them incredibly well!

The one issue I have with Meralco Theater is the sound. Sound designer Justin Stasiw did the best he could, but there were some glitches.

Body mics would unexpectedly be cut out, and that huge sound I would’ve wanted to hear from whenever the Seasons stood at a microphone wasn’t present (Bobby explained that when they would try to push things higher, it would result in uncomfortable feedback). However, in all the book scenes, dialogue was clear and didn’t sound overamplified, which I like.

All in all, “Jersey Boys” is a must-see! You’ll get excellent actor-singer-dancers giving the performances of their lives (I was pleasantly surprised to see the boys, who don’t normally dance, actually execute their choreography well). The standing ovations they have received thus far are all well-deserved. Come for the music, come for the story. You will not be disappointed.

Congratulations to the cast and crew of “Jersey Boys.”

(Warning: There is a lot of profanity, which can make more sensitive audiences uncomfortable. Don’t say you weren’t warned!)

“Jersey Boys” runs until Oct. 16 at Meralco Theater. For tickets, call TicketWorld at 891-9999 or visit its website at ticketworld.com.ph.