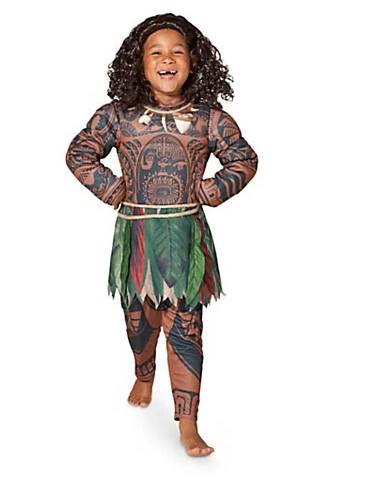 Disney’s latest animated movie “Moana” will not be released until next month, but it’s already facing some unwanted controversy.

The Polynesian-themed film is currently receiving criticism online for promoting and selling zip-up kid-sized costumes, depicting one of its characters ‘Maui,’ who is voiced by Dwayne “The Rock” Johnson.

The outfits in question are posted on Disney’s online shop, featuring the demigod’s signature tattoos, rope necklace and island-style skirt. The costume also comes with a noticeably padded-up arms and legs, to compliment the character’s broad stature.

Netizens, however, accused Disney of having poor taste and claimed that the Polynesian cultural look shouldn’t be made into a “Halloween costume.”

After discovering the item for sale on Disney’s online store,  Pasifika news outlet Samoa Planet retweeted, “Is this cultural appropriation at its most offensive worst? OR just a fun celebration of Pasifika?”

Is this cultural appropriation at its most offensive worst? #BrownFace. OR just a fun celebration of Pasifika? https://t.co/wVEtA0FMpX

Aside from the seemingly “inappropriate” costumes, the mythical cartoon is also under fire for allegedly perpetuating stereotypes of Polynesians by depicting Maui as overweight and  fat-shaming Polynesian kids.

The ‘Moana’ controversies aren’t the first time pop culture giant Disney has run into trouble over its depiction and use of ethnic identities to help generate multibillion-dollar profits.

The 1992 Disney hit Aladdin was also lambasted for its portrayal of Arabs, while female Disney characters Esmerelda, Jasmine and Pocahontas were accused of being depicted as simply “brown women, a collection of slapdash caricatures created to sell merchandise.”

Disney has yet to respond to the issue, as of this writing.  Khristian Ibarrola