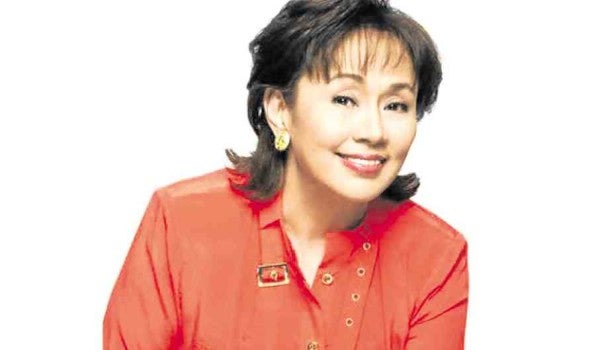 It’s always a delight catching up with one of my few favorites in the biz, Vilma Santos. Does she think Jessy Mendiola will be her future daughter-in-law? “She and Luis seem to be happy,” she says. “I’m here to guide them. Luis is mature enough to handle his own decisions.”

I also asked Ate Vi for her sentiments about the Senate hearings on the alleged Davao Death Squad. “I don’t want to meddle because as it is, they’re already having a hard time understanding each other,” she explains.  “I would rather not muddle the issue. But I’m paying attention to every word they say and hoping for the best. Our lives are at stake. I can sum it up in one word, Grabe!”  The Congresswoman for All Seasons is all fired up.

After the success of “Dirty Old Musical,” Robert Seña and Isay Alvarez of Spotlight Artists Centre are bent on mounting a repeat. “I hope we can produce the show again in November so we won’t lose our momentum,” says Robert. “But my coactors in ‘DOM’ and I must adjust our schedules. John Arcilla might not be available, so I hope Cesar Montano will be willing to replace him.”

Cesar told me he wants to watch “DOM” first before he decides on the offer. Hopefully, he will say “yes.” Actors of the same caliber flock together.

Cannes best director Brillante Ma. Mendoza’s two-minute short film, titled “Pagpupugay,” has been catching the attention of Pinoys here and abroad for its dramatic tribute to the carers of the sick.

The video is the first collaboration of the acclaimed director with RiteMed, a pharmaceutical brand. It has reached more than two million views on YouTube.

Gloria Diaz told me that her unsolicited “marriage advice” to newlywed daughter, Isabelle Daza, is this: Always agree to disagree and compromise. “Mommyisms” never fail.

Congrats to Saint Raphael Development Corporation for the successful relaunch of Providence Iloilo and for the fun prebirthday trip to my second home, Iloilo.