‘Wicked’ stars excited to perform in Manila in February 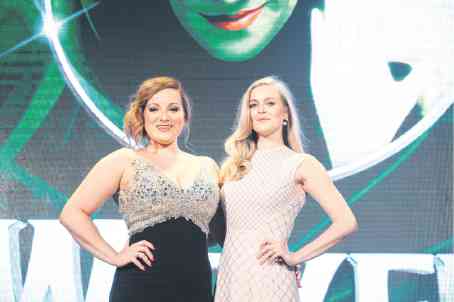 “The West End is lucky to have them,” said “Wicked” lead star Carly Anderson of the Filipino talents who continue to make waves in the bustling entertainment center of west central London.

Carly and costar Jacqueline Hughes are in Manila to promote the February 2017 run of the musical that is based on the best-selling novel by Gregory Maguire (“Wicked: The Life and Times of the Wicked Witch of the West”) at The Theatre, Solaire in Parañaque City.

“I have not had the chance to work with Filipino actors in the West End, but I have many friends who have been part of ‘Miss Saigon’ and ‘Les Miserables,’ who all had nothing but good words for them,” Carly told the Inquirer during a media gathering at Diamond Hotel on Friday.

Jacqueline added: “Lewis Bradley, who plays Fiyero, has worked with Rachelle [Ann Go in ‘Miss Saigon’], and he speaks very highly of her.” Carly described Rachelle Ann as “extremely talented and has a wonderful voice.”

“We also know of Lea Salonga and Joanna Ampil,” said Jacqueline of the award-winning Filipino actresses who also performed in several West End musicals. “We hope to meet them soon.”

Carly, who plays Glinda or The Good Witch, and Jacqueline, who portrays Elphaba or the Wicked Witch of the West, are part of the production that is currently playing at Apollo Victoria Theater in London.

“Wicked,” which features music and lyrics by Stephen Swartz, premiered in Manila in 2014 and opened to rave reviews.

“Wicked” will also be shown in Singapore and Hong Kong, prior to its run here in Manila. “It’s my first time to be here. I’ve only managed to research by checking out posts [about Manila] on Instagram,” Jacqueline said.

“I’m definitely going to check the islands like El Nido in Palawan and Boracay [in Aklan],” Carly said. “I can’t wait to try out the local food and meet people.”

Excerpts of the Inquirer’s chat with Carly and Jacqueline.

Of all the songs that you have to sing for the show, what’s your favorite?

Jacqueline (J): It has got to be “No Good Deed,” in the second act. It’s Elphaba’s turning point, the moment when she breaks down all barriers.

Carly (C): There’s a beautiful moment in the middle of Act One that we call Elphaba’s Dance. It’s a moment when Glinda, for once, does the right thing and admits that she has made a huge mistake and needs to fix it.

Before joining “Wicked,” what was your impression of the musical?

C: I moved to London when I was 17. “Wicked” was the first musical I ever saw. At the end of Act One, when Elphaba sang “Defying Gravity,” I was sobbing my eyes out. At that moment, I said, “I have to be on that show and play that part.”

J: I remember listening to the album when I was in college and thinking that it’s different, it’s contemporary. Like Carly, I was very emotional.

Has there been any changes in “Wicked” over the years?

J: It has changed and evolved. The US Creatives … has added lots of magic, some more flying monkeys.

Your characters are supposedly good friends. What did you have to do to work on that friendship?

C: Not much; we get along so well.

C: We’re both Scottish, so the love for Scotland is something that we share, as well.

How do you make sure you deliver an impassioned performance each night?