Goldie Hawn explains why she stopped making films for 14 years 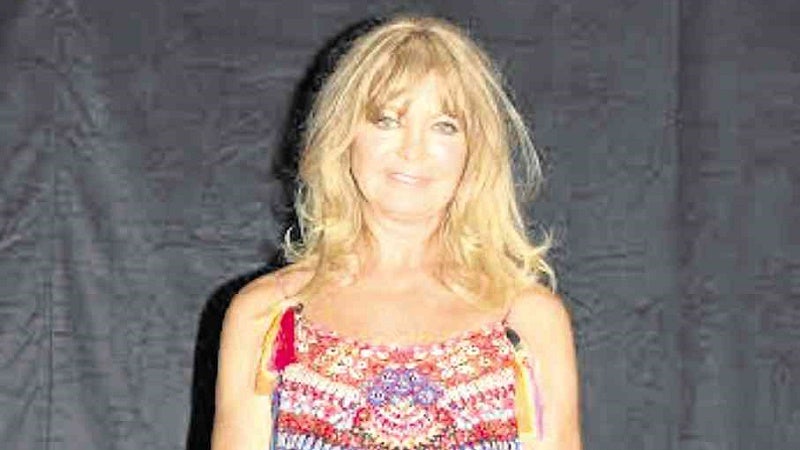 LOS ANGELES—“I took 14 years off because I felt that life should be full of different things,” Goldie Hawn explained on the Hawaii set of her still-untitled comedy, her first film since 2002.

“I’d been making movies for a long time,” added the 70-year-old actress. “As a woman gets older, her choices are less. I wanted to do things that interested me, not just work to work.”

We talked to Goldie in a hardware store in Honolulu. Goldie and Amy Schumer play mother (Linda) and daughter (Emily), respectively, in the latter’s story, which she wrote with Kim Caramele and Katie Dippold. Jonathan Levine directs the comedy, which takes place in Ecuador and then Colombia. Hawaii subs for both countries.

Amy, whom we also interviewed, revealed the plot: “Emily is supposed to go on vacation with her boyfriend. He breaks up with her, and she can’t get anyone to go with her. So she asks her mom, Linda, who’s afraid of everything.

“Linda is almost agoraphobic; she lives in complete terror. She thinks, ‘We’re going to get kidnapped. They’re going to steal our organs!’ But I’m a total optimist and think that everything’s going to work out. Then, everything that she thinks is going to happen happens (laughs). Mother is always right. So, it’s really a story about the relationship of mother and daughter.” 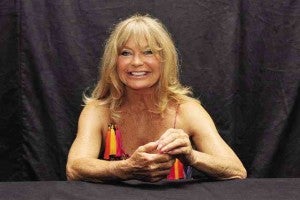 Goldie, tanned and relaxed in a long, printed dress and sandals, chirped about being back on the set—in Hawaii, no less. “I’m having a ball! It’s the gift of a lifetime. It’s a great location. I may never go home (laughs).” After all these years, she’s still joyously giggly.

“Believe it or not, this is my hair,” Goldie said about her blonde mane. “I haven’t dyed it yet, but I’m sure there are grey hairs in here from producing movies (laughs). ”

Born in Washington, DC, Goldie began taking ballet and tap dance lessons when she was 3 years old. At 16, she played Juliet in a production of Shakespeare’s classic in Virginia. When she turned 18, Goldie moved to New York to become a professional dancer. She found work as a go-go dancer and in revivals of musicals.

In Los Angeles, a gig dancing in the chorus line of an Andy Griffith TV special led to her being cast in a sitcom and subsequently, “Rowan & Martin’s Laugh-In.” Film roles followed, including “Cactus Flower” (which earned Oscar and Golden Globe best supporting actress awards for Goldie in 1970), “Butterflies Are Free,” “Shampoo” and “Private Benjamin.”

Working almost nonstop, Goldie began her hiatus after starring with Susan Sarandon in “The Banger Sisters” in 2002. “I turned my gaze to what the next part of my life was going to look like,” she said. “And it had to do with what I cared about philanthropically and what I felt was going wrong with the world. If I could do something for children, that was what I wanted to do. I’ve been doing that for 14 years.”

Goldie established The Hawn Foundation, through which she created and produced a program called MindUP—a research-based training program for educators and children where “students learn to self-regulate behavior and mindfully engage in focused concentration required for academic success.”

“I wrote MindUP along with psychologists, scientists, teachers and practitioners of meditation,” Goldie said. “Now, over a million children are practicing it. So, it’s been an extremely exciting time in my life.”

The program was one reason she enjoyed her long break from making movies. “I didn’t miss it,” she pointed out. “We’re also in the UK, China, Australia, South America and Serbia.”

“If you do one movie after another, you have an empty life,” she stressed. “I love life. I don’t think that work is something that should supplant your experience of living.”

Goldie’s family life is anchored by her relationship with Kurt Russell, which began in 1983. They have a son, Wyatt, a former pro hockey player who’s now an actor. Kurt helped raise Goldie’s children with her ex-husband Bill Hudson—actors Kate and Oliver. Both call Kurt “Pa.” Goldie is the de-facto stepmom of Boston, Kurt’s son.

Surprisingly, Goldie does not have a star yet on the Hollywood Walk of Fame. She will finally get one next year. The story Goldie shared about this coming honor reflects the deep love between her and Kurt.

Breaking into her trademark 100 megawatt smile, Goldie revealed, “It’s a lovely thing. Kurt was asked to have his star done and he said, ‘I don’t want to do it, unless Goldie has one with me.’ So they came to me and said, ‘We’d like you to have a star…’

“I said, ‘I don’t want to do that unless Kurt is with me.’ So we’re going to do it together. We’re not getting married. It’s a different kind of ceremony (laughs), but that’s going to be nice.”

Amy’s mother/daughter story got her in front of the cameras again.

“Amy is amazing! I thought, wouldn’t it be fun to be her mom in the movie? The improvisation with Amy is so much fun. She’s a master at it. That isn’t my thing, although I can improvise, but that’s an art all its own.”

She recalled the first time she watched Amy. “I saw ‘Trainwreck’ and I thought, wow. This girl has a lot of talent, gifted in many ways. She’s kind, smart and her instincts are great. She has empathy, which comes out in everything she does.”

On her own mom and being a mother herself, Goldie said, “Mothers have the most important role on the planet, because we mold and nurture our children. My mother was unbelievably nurturing, but not overly affectionate to the point where everything I did was ‘great.’

“She was a taskmaster and if it wasn’t right, she said it wasn’t right. So I didn’t have some inflated idea that wasn’t real about who I was. But she was supportive. I knew that she was looking after me in the best way.

“I could then, without fear, know what it’s like to mother appropriately. My mother taught me what to do, so I gave that to Katie and my sons. My son, Oliver, is an amazing father. Katie cares about things other than herself. My other two boys (Wyatt and Boston) are also amazing.”

Asked if there are any parallels in her roles as a mom in real life and in this movie, Goldie replied, “One of the aspects of my character was built on the experience of knowing that when you have a daughter, it’s important that you don’t force your ideas into her world. But what she learns is to gain her own independence and give her daughter hers.”

No, she’s not at all like her character, Linda, who’s a worrier, according to Amy’s description. “No, I’m not afraid,” Goldie confirmed.

“I’m cautious but I’m not fearful. I must admit that I did quit skiing, because any sport with an ambulance waiting at the bottom of a mountain is not a sport I want to do anymore! But other than that, nothing else. We need to be afraid more of people than things.”

“Don’t get me started on my kids,” she reacted with a laugh when prodded to give an update on her children. “They’re fabulous. Wyatt was just honored here in Maui (Film Festival), and he got the Rising Star Award.”

Goldie is relieved that her hockey mom days are over. “I’m so happy,” she said. “Believe me, when Wyatt hung up his skates, it was very different. Because I’ve been at hockey rinks for 25 years—at 3:30 or 4 in the morning, with cold coffee, freezing to death in the rain, and all that.

“Then came the day he was going to hang up his skates. It was his last game, and I cried my eyes out (laughs). Wyatt did good. He picked up acting. He loved being a hockey player and not being an actor, but now, he’s got it down.”

Goldie did not have encouraging news for fans hoping for a sequel to “The First Wives Club,” in which she starred with Bette Midler and Diane Keaton.

“The script isn’t working,” she admitted. “They have it at Netflix. I’m not producing it, so I don’t know.”

On staying in shape, Goldie harked back to her origins: “I do something with my body every day. I just worked out (this morning). I ran for 25 minutes, lifted, stretched and all that. I started as a dancer. Dancers don’t like to let their bodies go. We’re just too proud of what we were able to do, and think, I’m not going to fall too far away.”