Brandi and Jarrod of ‘Storage Wars’: Finding treasures–and each other 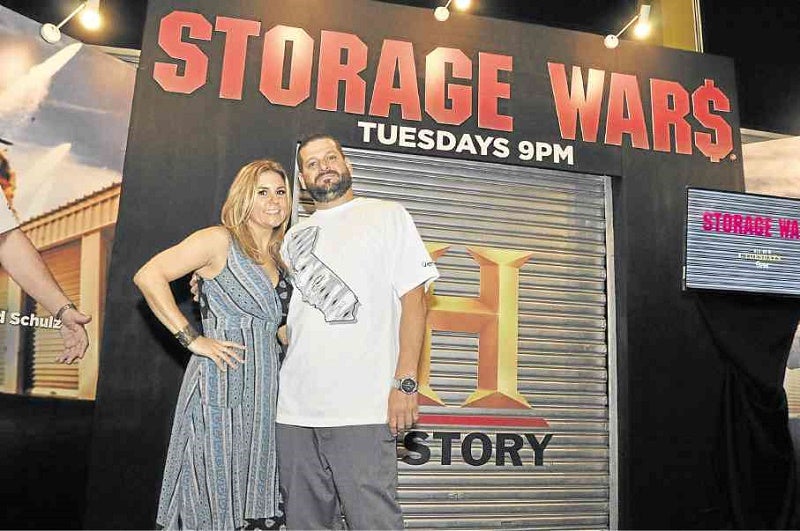 While Brandi is often described as the “voice of reason,” longtime partner Jarrod is deemed the “loose cannon” in the show.

In this interview held during History Con, which wraps up Sunday, they both had a mouthful to say—particularly, about their costars, Dave Hester and Barry Weiss.

Indeed, this combustible couple has agreed to disagree on many topics—especially regarding the storage units they’ve purchased in the auctions featured in the show.

But they seem to be in agreement about one more thing: Their partnership, much like the reality show that premiered in 2010, is as real as it gets.

At the start, did you ever imagine that the show would be this successful?

Brandi Passante (BP): Not in a million years! We had no idea.

Jarrod Schulz (JS): When we started filming the show, we were already into buying storage units and had the Now and Then store. I told her back then, even if nothing happened…even if the show ran for only one season…at least we’d be able to get free advertising for the store.

We never thought we’d get this far. I mean, we’re now in Asia for the first time!

Do you see your kids in the same line of work?

JS: Our kids will not be in the buying-storage units business. Our son Cameron wants to be a director or producer—which is great. I told him it’s a tough industry.

Then, he said if it didn’t work out, he could always run the store. I said, no way! You won’t even have your first job there. You need to make your own path. Don’t follow in my footsteps.

And your daughter Peyton is into track-and-field?

BP: Yes, she likes to run, but she’s now into competition cheerleading. She is very athletic.

JS: Cheerleading is the most competitive sport I’ve ever been in!

I coached my son’s football team, and it was nothing compared to cheerleading—which was off-the-charts crazy!

The parents were fanatical. There were 9-year-old girls dieting, because they needed to lose three pounds.

What are the most expensive and unique items you’ve ever found?

BP: Along the way, we’ve found quite a few: “Star Wars” figures, a samurai helmet, bird boxes, the horse head. It was quite shocking that these things were worth a lot of money.

Brandi, were you surprised that Jarrod knew a lot about fashion and Levi’s jeans?

BP: Jarrod surprises me every day.

JS: Just because I am not fashionable doesn’t mean I don’t know anything about fashion.

But you have your own clothing line, Outlaw.

JS: That’s my brand! I either create or approve everything that comes out in outlawapparel.com.

Jarrod, do you really know how to make candles?

JS: You watch too much TV!

BP: You have done research, sir!

JS: Yes! I never actually made candles on a regular basis, but I definitely made some candles in my life before the show.

Is Dave Hester a real jerk?

JS: That was a short answer.

BP: That was quick and easy.

JS: The best and worst part of our show is that it is as real as any reality series out there.

Well, it’s not a coincidence that we show up in the same place at the same time. There was some planning involved.

Will Barry Weiss be back?

JS: Barry is like 214 years old, and he always comes back. No matter how far away he is, you are in a crowd and, all of a sudden, there’s Barry.

JS: We’ve kept in touch. We see him a few times a year. We hang out.

JS: Brandi is an amazing cook. Believe it or not, before we got together, I didn’t even put salt in my food. For me, food was something you ate so you could go on living. It wasn’t something to enjoy.

When Brandi came into my life [15 years ago] and started cooking for me, she really opened my eyes to a lot of things.

What is your favorite among her specialties?

JS: I like her meat loaf and beef stroganoff. We have a garden in our backyard. We picked 30 tomatoes, and she made three jars of tomato sauce.

Brandi, was it love at first sight for you?

JS: (Laughs) Nobody ever asks us that question.

BP: That was a process. He wore me down. He was persistent.

JS: When Brandi and I started dating, we were coworkers in the same carpet store. Technically, I was her boss…and you were not supposed to do that.

A mutual friend put notes on my truck, reminding me to be nice to Brandi, because I could be abrasive.

In the show, you seem charmed by him, though.

JS: Obviously, I don’t get by on my looks! So I gotta be witty. I have to do things to compensate.