Rufa Mae Quinto has finally found 'the one' | Inquirer Entertainment

Rufa Mae Quinto has finally found ‘the one’ 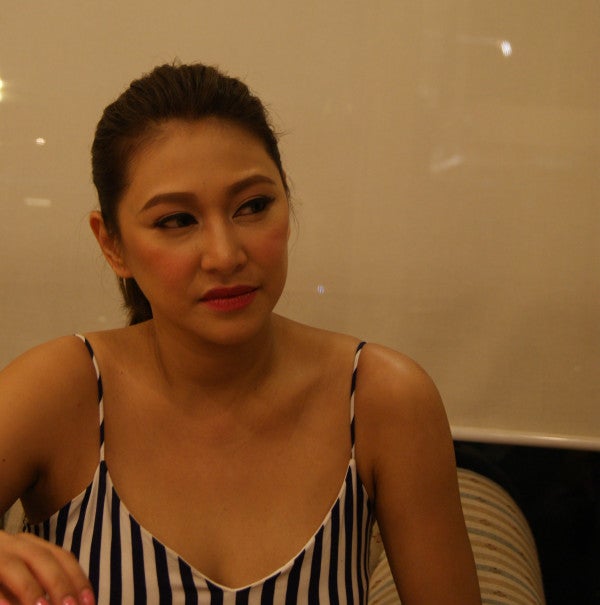 She definitely projected a perfect illustration of the saying that indeed, “all’s well that ends well.” Rufa Mae, at last, has finally found her forever with Fil-American fiance Trevor Magallanes.

The actress sent some sort of a shock wave to an entire nation when she announced her engagement to her non-showbiz boyfriend last February via her Instagram account. Not a few cast doubt on her pronouncement; some asked if it was true and if it was for real this time. But Rufa Mae and Trevor have managed to make everyone see how their love story is as compelling as a tale of true love and a journey to forever.

Rufa Mae has been around the showbiz industry for more than half her life. Spanning a two-decade career, she has made people laugh with her distinct comedy and her remarkably splashy lines. Despite the laughter and funny antics, her love life seemingly has always taken the backseat.

This is quite surprising to a lot of fans and critics. Throughout her showbiz career, Rufa Mae had a long list of dating history. She had been romantically linked to and dated actors, athletes, non-showbiz personalities, and businessmen. But no matter how close some of her relationships might have finally ended up in a marriage, none ever made it to the altar. Now that she’s 37 and having moved on from failed relationships, it had definitely crossed the “Booba” starrer’s mind that she might, at some point, end up growing alone.

Most of her contemporaries now have families. But even though the pressure of getting married increased as the years went by, Rufa Mae said she has managed not to succumb to pressure, focusing instead on “fixing” herself and becoming a better person so when the right man comes she is ready to settle and have a family of her own.

Meeting the love of her life, finally 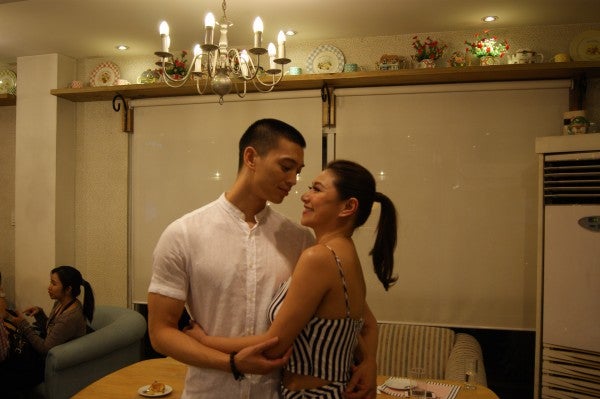 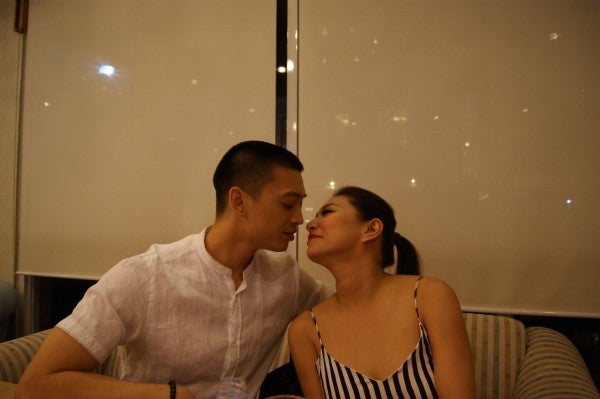 Not too long ago, Rufa Mae made several travels to the United States. But for whatever reason she kept going back there, she didn’t really know. In fact, she said that even she was surprised why she had to fly halfway across the world without knowing why. But as fate would have it, God finally gave her an answer. On her fifth trip to the US, she met Trevor Magallanes, a 29-year-old financial analyst.

But it’s not surprisingly different in Trevor’s case. Rufa Mae’s celebrity status has paved the way for the handsome bachelor to know one of the Philippines’ sexy comediennes.

“I’ve known her since 2007. Most of my friends are Filipinos so I also wanted to learn how to speak Tagalog. So while I was in the airport, I subscribed to TFC (The Filipino Channel) and GMA. Then I saw her on screen, she was my crush, out of all of the people in those shows, she was the one who really struck me and she was like my dream girl, for real. I always wish that I could find a girl like her one day and fast forward, it happened to be like I’m with her now. It really is a dream come true. There are so many things that led to us being able to meet that it’s such a coincidence almost that I would say a miracle,” the University of San Francisco alumnus and BS Administration major in Finance graduate proudly told the Inquirer.

The couple was very sweet and undeniably in love during the interview, sweetly kissing and holding hands as they gamely answered questions. But even though they have quite a young relationship, they both seemed sure of that they are made for each other.

“Wala namang blind date, basta talagang nangyare lang, one day you met this person, you say hi, hello and then you click na right away. Yun na yun, everyday di na kami naghiwalay and then after one month, we got engaged,” Rufa Mae said.

Trevor said he’s quite sure Rufa Mae is the one for her, basing it on his dating history. He said he immediately saw the change in him when he met the comedienne.

“For me I was sure because I’ve dated a lot of women and I’ve never really been satisfied with any of them and I’ve never been willing to compromise on anything and if there was something I didn’t like or something that they didn’t like about me it was like, bye. So I’ve never really met a woman that met my standards, but when I met Rufa she exceeded my standards by far like way exceeded and I already knew that I would never find a woman like Rufa and the way that the relationship was going and how quickly it was progressing how fast I was falling I knew that she’s the one for me”, Trevor said.

Rufa Mae was smiling in kilig as she listened to the words of the man who she was ready to spend the rest of her life with.

“Everything I hear, all my dreams and everything about a guy that I’m gonna end up with, I heard it from him, so yun pa lang those thoughts na dream ko, everything like hobbies, sports, dream, what he likes to do and to have a family, iisa kami ng gusto, I can hear myself from him. Sa loob-loob ko I like this kind of guy who has graduated and well-mannered and all pero to myself only lahat yun I saw it in him”, Rufa Mae said.

With love having cast a magic spell all on the happy couple now, everything seems picture-perfect. But again, surprisingly, it wasn’t a favorable situation then when they started dating. Rufa Mae admitted she had hesitated then on going out with the young bachelor.

Trevor even recounted that Rufa Mae even hung up on him once when he was still trying to win her over.

“On facetime, she hung up on me, so I already knew that my chances were very small. I told her hey let’s try to facetime right now, all my friends were like go, but she hung up on me. But I told myself I will never give up and I will give it a shot because she’s the girl of my dreams”, Trevor said.

Rufa Mae has always remained sultry and the fancy of every man’s dream, but inevitably, as all humans would, the sexy actress has also aged. She said that some people worry that their age difference would be a factor to their relationship, but the couple just shrugged it off.

“They [the people] thought you’re not serious because you’re young,” Rufa Mae translated to her fiance since he [Trevor] barely understands Filipino. 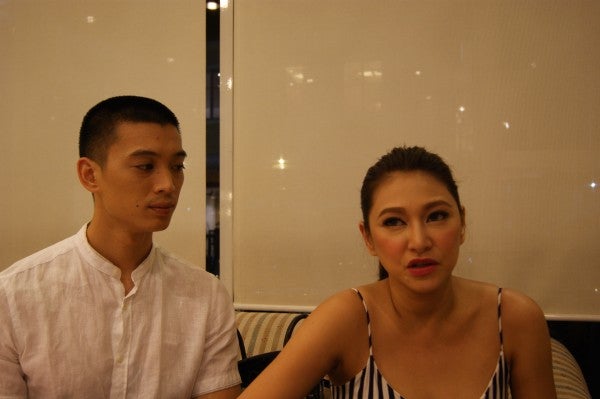 While enjoying his steak, Trevor clarified to the Inquirer his own notion of their age difference.

“To me, age is not a factor; what affects me is how age could affect how you could start a family. That’s my only a concern. I want to have a baby”,

Rufa Mae also agreed with Trevor’s ideals as to planning their future family.

“He wants to give me a baby na, pero no need to rush naman kasi may time pa naman. That’s why we wanna get married para we will be blessed more,” Rufa Mae said.

Story of the ring 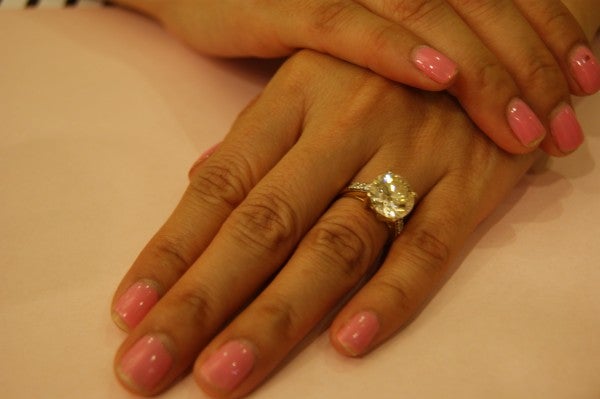 Rufa Mae may stun fans and followers with a huge diamond ring she wears that serves as an engagement ring. But she’s quick to add it was not the one Trevor wanted to give her to wear. He initially wanted to give her a ring worn by his mom but it didn’t exactly fit the finger of the “Ang Huling Henya” starrer. So, Rufa Mae wore another one from her own collection in the meantime.

“The engagement ring that I gave her was a heirloom from my mom but it doesn’t really fit her and it was really small,” Trevor explained.

Knowing full well that she is a celebrity, and as a normal guy, the ring he plans to give concerns him very much as he wants to give his fiance the best engagement ring ever.

“For her image too, I don’t think it would be very impressive, it’s too big for her anyways. It has to be resized. So the one that she wears is actually from her own collection but eventually when I start to build up my career and gradually become successful, I’m definitely gonna buy her all the finer things she likes. I didn’t really have a lot of money, coz I’m just starting out basically”, Trevor added.

“The heirloom from the mom doesn’t fit me, pinareresize ko pa, so I sold to him (she says jokingly). Galing pa ito (ring) sa family, lola ko din, it’s just a symbol,” clarified the comedienne.

Their wedding will definitely take place here in the country. Though Trevor’s family and friends are mostly based in the US, the couple doesn’t want their wedding held anywhere else. Rufa Mae also feels she owes her fans and supporters so much that she definitely wants to share this major event in her life with them.

“I wanna share it with them (Filipinos) since all my life I’ve been working. If I get married I want people to get involved. Yung happiest moment of my life eh hindi ko ipagkakait sa lahat ng nagmahal sa akin.” 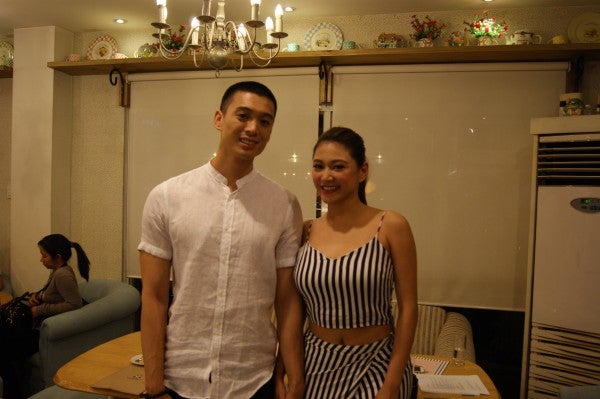 As for the details of her wedding, Pepsi Herrera will be doing her wedding gown.

They’re still firming up their honeymoon plan, saying they would definitely have more time to decide this after their wedding.

“We’re not there yet, her dream honeymoon would be Paris but me I’m more interested in like Thailand and Indonesia, maybe here in the Philippines we’d like Palawan”, Trevor shared.

Lastly, no worries for Rufa Mae fans, her marriage will surely not take the sexy comedienne away as they have finally decided to settle here in the Philippines.

“Here, the life is so much better. I feel like the values are so much different unlike in the States where it’s so much individualistic, it’s very stressful, you can rarely come across people who are truly in the United States unlike here where the people are always happy. Filipinos are caring and respectful. I personally will choose to live here,” Trevor confided.

Rufa Mae and Trevor’s union will be a Christian wedding celebration on November 25 at the Ortigas branch of The Blue Leaf Events Place.