Andi Eigenmann’s trip to the Croisette

For the first time in her eventful life as a traveler, actress Andi Eigenmann was forced to buy luggage.

It was because she had to pack at least two “chic” gowns (by her faves Boom Sason and Mark Bumgarner) for the red carpet of the Cannes Film Festival, where her latest movie, Brillante Ma. Mendoza’s “Ma’ Rosa,” is the country’s entry in the Main Competition.

“I went to Morocco, United Kingdom and all over Asia with just a backpack,” she told the Inquirer two days before her flight to Europe last Monday.

But this time, for obvious reasons, she couldn’t afford to travel light. She’s not complaining, though, because the French Riviera is on top of her must-visit places list. (She’s eyeing side trips to Nice, France and Monaco, too.)

Moreover, the journey to the Croisette, the fabled avenue of dreams fronting the Palais (main theater of the world’s glitziest fest), is the fulfillment of a family legacy, she pointed out.

Now, it’s her turn to traipse down the red carpet. Making it extra-special is the fact that she will be sharing the “once-in-a-lifetime” experience with her mom, actress Jaclyn Jose, the titular heroine of “Ma’ Rosa,” which premieres in Cannes today.

“To think, it’s my first indie,” she volunteered. “I knew right away this film would be special. My mom and I avoided playing mother-daughter onscreen for the longest time… until this project came along.”

Andi’s mom is a veteran of sorts in Cannes, having attended the fest in 2008 for Brillante’s first competition film, “Serbis.”

Andi said she would also bring a piece of her dad, the late actor Mark Gil, who likewise attended Cannes for Mike de Leon’s “Batch ’81,” an entry in the Directors’ Fortnight section in 1982. 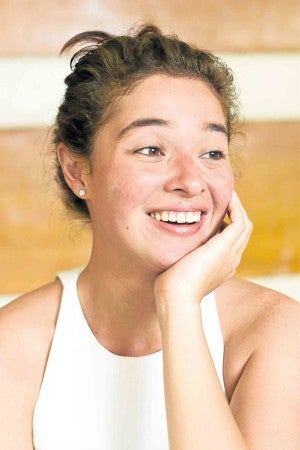 SHE IS eyeing side trips to Nice, France, and Monaco, too. Eloisa Lopez

Her dad used to gently encourage her to try indie movies—after all, she had already made a name for herself in a slew of high-profile teleseryes and mainstream flicks, he said.

“Since you’re now financially stable, it’s time to explore your art,” her dad once told her.

Andi asserted that her first foray into the indie scene had arrived at the right time. “I’m at a point where I am reevaluating myself… looking at where I am in terms of my life and career.”

So far, she is enjoying the exhilarating ride. “I am 25 and I am living my dream. I am so glad I was never the type to conform. Now, I am so close to finding myself.”

“Andi has always been into indie movies,” Jaclyn explained. “She met Brillante when she was a kid.”

“I love Brillante’s movies,” Andi quipped. “When I was young, I preferred to tag along to the sets of my mom’s indie films. I couldn’t care… for the soap operas!”

In Cannes, she plans to watch as many movies as possible and, hopefully, score selfies with her idols, including Woody Allen (whose film, “Café Society,” opened the fest), and other main competition directors, Xavier Dolan (“It’s Only the End of the World”) and Pedro Almodovar (“Julieta”).”

She also wishes to meet actress Chloë Sevigny. “She directed a short film (“Kitty”) which is in [the International Critics’ Week section of] Cannes.”

She said she admires actor-directors (like Woody and Chloë) because she hopes to follow in their footsteps someday.

She is currently honing her skills as a wordsmith via her own travel blog (andieigengirl.net). She is also working on a travel show (“Mermaid Wanders”) on the Viva Channel, which aims to promote ecotourism in the country.

Her only regret about this European trip was that she wouldn’t be able to bring her 4-year-old daughter Ellie with her. Ellie often acted as her travel companion in the past.

Andi recalled: “Ellie asked me: ‘How come I got to join you before and now that you’re with Nanay (grandmom Jaclyn), I can’t go with you?’”

Her daughter can be inquisitive and assertive, Andi conceded.