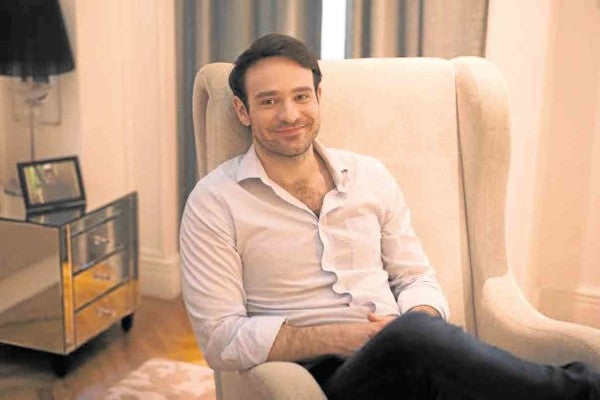 THE BRITISH actor is gracious and eloquent. NETFLIX

Daredevil is known in the Marvel Cinematic Universe as the Man Without Fear. But for Charlie Cox, the 33-year-old British actor who portrays the blind superhero in Netflix’s acclaimed “Daredevil” series, fear is precisely what drives lawyer-by-day, vigilante-by-night Matt Murdock to rid New York City’s Hell’s Kitchen neighborhood of its criminal elements.

“The Man Without Fear is a label the public attributes to Daredevil because of what he does,” says Charlie. “But that label was initially a great concern of mine, because it isn’t interesting to watch a man who doesn’t fear anything—if you don’t feel fear, there’s no place for courage. If you’re going to play the character in 13 or 26 episodes, you can’t start off by robbing him of that great attribute.

“The public ‘sees’ Daredevil’s fearlessness. In reality, however, Matt is terrified, but he chooses to punch through that fear. Every time he doesn’t know what to do, he just keeps putting one foot in front of the other—he keeps putting the suit on at night and sees where it takes him. Hopefully, by battling one criminal at a time, the city will become a better place.”

When we flew to Singapore last weekend to interview Charlie, who’s currently doing “Daredevil’s” media run in Asia to promote the March 18 release of the series’ second season, the actor remained gracious and eloquent, even if our one-on-one chat with him took place at the tail-end of a string of panel discussions with other journalists in the Southeast Asian region.

It was obvious that a lot of thought was put into Charlie’s characterization of the visually compromised superhero, last seen on the big screen in 2003, with Ben Affleck a wee bit underwhelming in the title role.

Because of Charlie’s star turn and Vincent D’Onofrio’s indelible portrayal of nemesis Wilson Fisk aka Kingpin, Netflix’s 2015 reboot was warmly embraced by fans and critics alike. 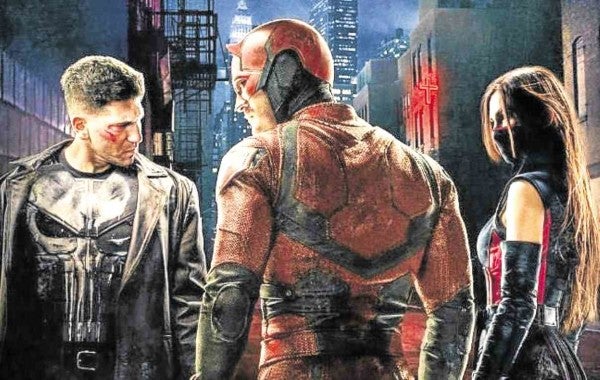 Excerpts from our interview with Charlie:

Please elaborate about Matt’s disparate choices in women. It seems like Karen (Deborah Ann Woll) appeals to Matt’s law-abiding side, while Elektra (Elodie Yung) satisfies Daredevil’s need for speed and danger—and Claire (Rosario Dawson) is somewhere in between.

It isn’t that black and white—it’s along the same line as human beings operating as their own contradictions. When he’s with either Karen or Elektra, he’s one version of himself.

Karen brings out the man Matt’s dad has always intended him to be—a guy who operates from a place of kindness and generosity. With her, he is vulnerable and trusting… and can be happy and have a simple life.

Problem is, she doesn’t know Matt’s greatest secret. He can’t be completely himself with her.

With Elektra, the opposite is true. She accepts him as a vigilante and brings out the Daredevil in him. But, at the same time, she thinks he’s just like her—someone who has a disregard for people’s lives and property. Unfortunately, that isn’t who he is deep down, so he’s unable to be authentic with her, either.

When Claire came along, Matt felt great relief and euphoria from being able to talk to someone and not having to “hide,” because she knows him both as a lawyer and vigilante.

[Having said that], I don’t think Matt was in love with Claire the first time they met. He was incapable of love at that moment in his life because he was obsessed with Wilson Fisk. He was emotionally “unavailable.”

Matt isn’t  a sociable being, but he’s set to form the superhero group The Defenders. What will convince him to work with as happy a bunch as Jessica Jones (Krysten Ritter), Luke Cage (Mike Colter) and Iron Fist (“Game of Thrones’” Finn Jones)?

No, as you said, he’s not traditionally a team player (laughs). That’s a good question for the writers of “The Defenders.”

But I think one of the lessons that Matt has learned in Season 2, where he crosses paths with Elektra and The Punisher (Jon Bernthal of “The Walking Dead”), is that he needs help… that what he does is too much for him to have to deal with on his own. So, maybe that will lead into an alliance that paves the way for The Defenders.

Does Matt see his darker side in The Punisher and Elektra? Is that why he continues to “work” with them even as he disapproves of their cruel methodology?

That’s partly true. Because of what Karen says to him, Matt sees the possibility that he and Frank Castle aka The Punisher can be similar—which I think is a scary realization for Matt.

His relationship with Frank is very complex because while he doesn’t agree with Frank’s methods, he can’t help but understand his motivation.

As a result, he wholeheartedly believes that The Punisher needs to be sent behind bars. But, at the same time, he doesn’t want it known that the reason he agrees to take on the case of Frank is because it’s an opportunity for him to defend himself and [his crimebusting activities as Daredevil].

When he gets up in court and asks the jury to “take a minute to think about what [Frank] does and what he’s attempting to do,” he’s talking about himself. It’s an opportunity for Matt to defend his own actions.

Do you think the world as we know it needs vigilantes like Daredevil and The Punisher?

I don’t believe that any society would benefit from someone who works outside the law. So, no, it doesn’t.